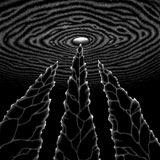 Monoliths are a sludgy doom trio comprised of David Tobin of Ommadon on guitar, Henry Davies of Moloch on drums, and Tanya Byrne of Bismuth on bass (the latter two also being band-mates in Nadir). Their Self-Titled debut release has two tracks and is thirty-three minutes long. It is, exactly as you would and should expect if you know anything of the aforementioned bands, heavy stuff.

Perpetual Motion begins with a hypnotic half-riff on the maxed-out overdrive bass of Byrne. Guitar and drums kick in just as they should but instead of the hypno-riff going on and on and on, soon enough we get a bit of added groove, moving things on from Bong territory (not that there’s anything wrong with Bong) into something more like that of Sleep. This big riff then just gets bigger and bigger. The anticipation of vocals surely about to kick in builds and builds and builds, but it doesn’t happen. Instead Tobin starts to slip in some tasty leads which take the whole thing up another notch. So much so that when he returns to the lower strings… well fuck me if that riff isn’t even huger than it was before! There’s nothing sloppy here despite the palpable recording volume, this is tight and engaging; not a mere wall of mesmeric fuzz tone mono-riff. Tobin starts to bring in a little bit of his weirder ambient, post-something guitar sounds somewhere around the ten minute mark adding yet another layer. Slowly the original hypno-riff locks back into place becoming a knowing refrain. It seems to be saying something along the lines of “yes, we know, that was fucking massive”.

The Omnipresence Of Emptiness starts off with a monstrous Phrygian-sounding riff, Davies hitting hard and slow then filling maniacally – twatting every last note out of it, in the best possible way. Again, it’s an exercise in getting the last thing out of this riff that you could possibly get but it’s never, ever dull. About six minutes in Bryne‘s bass comes to the fore like fuzzed-out thunder and then, three quarters of the way into the record, we get our first vocals. Deep, single syllable growls, used more as percussion than anything else – just an extra low to take things that one step further. Again Tobin starts to get a bit more experimental, bringing in high, frantic, fluttery leads over the staggering rhythm before almost dropping out completely. When things kick back in its everything all at once – all layers – the growls joined by a screech, the riff rising like a monolith. Again, it’s a knowing refrain. Monoliths know exactly what they’ve done, and they’re going to do it again and again. At least, I really hope they will.