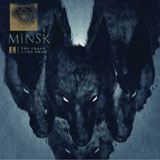 Minsk first came to my attention a decade ago with their stunning debut Out Of A Center Which Is Neither Dead Nor Alive. Their crushing waves of post metal riffs was perfect for a man who had just discovered the beauty of Isis and Neurosis. Fast forwarding 10 years we find Minsk coming off the back of a six year hiatus to release their newest, The Crash And The Draw, the much anticipated follow up to 2009’s With Echoes In The Movement Of Stone.

Coming straight out of the gate with the moody crash of the atmospheric To The Initiate, Minsk show us straight away that they have lost nothing of their deft melodic touch, nor their hefty riffs. Glacial melodies temper the thrumming tribal drumming, while ghostly vocals hang in mid-air, caressing your ears with their words of honey. The peace is shattered by an upping of the tempo, with a primal roar and a deafening collapse of guitars. Minsk have the platform to step out of the massive post metal shadows cast by Neurosis and Isis, and with tracks like this kicking off their albums, there’s no reason for them not to.

Within And Without continues the trend, showing that post metal may have hit its peak a few years ago, when done right there are few things as affecting. As progressive as some parts can be, quality post metal strips metal back to its core elements of riff and roar. It is about power, and Minsk have that power. Within And Without matches crushing heft with titanic roars and a brutal drumming performance. Proof surely that truly heavy drumming is not just about your BPM.

The band don’t even fall into the classic post metal tropes of slow burn build into huge crashing crescendo of guitar. Onward Procession I – These Longest Of Days starts with a grinding riff before slamming into a massive doom chug that flattens all in its wake. Onward Procession II – The Soil Calls is relentlessly heavy, while Onward Procession III – The Blue Hour slows the tempo and the volume down to a menacing crawl, a calm before the inevitable storm of part Onward Procession IV – Return, The Heir. It’s a piece that would work as one long track, but is deftly split up into four.

It is at this point you realise that there’s still half an hour of this evocative music to go. The soothing ambience of Conjunction leads to the soaring The Way Is Through, where Minsk’s less riff heavy side appears for a flurry before a hefty crush returns. Now is Minsk’s time. With Isis retired, and Neurosis only descending from the Holy Mountain of the Riff every so often to grace us with masterpiece after masterpiece, post metal need a new standard bearer. The Crash And The Draw is the album, and Minsk are the band.