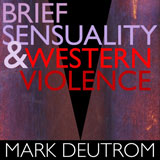 Mark Deutrom, ex-Melvins/Clown Alley player, ex-Alchemy Records head honcho and all around dapper gentleman, finally delivers a follow-up to his thoroughly splendid 2011 The Value Of Decay LP – a release that you may well remember this very writer enthusiastically frothing over – and I’m happy, and in-no-way-surprised, to report that it more than makes up for the two year wait.

The crunching bluesy rock ala ZZ Top approach is, for the most part, reined in and replaced with a woozy, hazy psychedelic approach that occasionally evokes the more recent Earth material, shot through with a streak of languid jazz, and the musique concrete elements are employed in a somewhat starker fashion – most notably on opening gambit ‘Dick Cheney’, a slow burning serpentine beast that uncoils languorously across its twenty minute length, beginning with the rustling shake of a medicine man’s rattle, moving through majestic, portentous cathedral organ and humming, droning guitars and into needling, Godflesh-esque hypnotic dischord and scattershot percussive skittering before shifting into an awkwardly stumbling, thudding riff, initially punctuated with the off-kilter clang of a bell, but soon expanding into a crunching, trudging rhythm that blooms into gorgeously creamy hanging powerchords and subtly unsettling dreamlike ambience, with Deutrom‘s smoothly smoky voice snaking sinuously throughout.

Slo-mo jazz of a twilight persuasion informs the deeply impressionistic ‘Winter Haystacks At Twilight’, moodily shimmering clean guitar twinkling in a void, backed only by subtly dubbed-out brushed kit from Aaron Lack and emboldened by a mournful e-bowed guitar line that winds through the heavy spaces. Beautifully subdued and truly wintery in tone.

Things warm up somewhat for ‘Sky Full Of Witches’, a somnambulistic shuffle through total Robin Trower ‘Bridge Of Sighs’ territory – which is sure as shit no bad thing – replete with lazily revolving univox chording and pulsing drums. Deutrom smears a solo across the latter half and uses that smoky ol’ voice of his with aplomb. The Top is back for the stiffly funky guitar work out that opens ‘Temple Smasher/Other Gods’, an aggressive bluesy shuffle that drops back into thudding rhythm found in ‘Dick Cheney’ before dropping out entirely as the track becomes a full-blown psychedelic oddity, freak flag proudly hoisted atop guitars that sound like distant gamelans and Deutrom‘s echoing plaintive voice imploring across the gulf.

Deutrom lets his inner Charlie Christians and Grant Greens out for the everso subtle jazzy swing of ‘A Shaky Rabbit’, which he delivers vocally in such a way as to evoke a significantly more tuneful Neil Young. Echoing trumpet cries out across a minimalist backing for the latter part of things and the whole pretty much tells me that Deutrom was most probably the main man behind such Stag-era Melvins tunes as ‘Tipping The Lion’ and ‘Black Bock’. Christian and Green stay in the driving seat, joined by the ghost of the otherwordly Sun City Girls, for the first half of meditative jazz guitar ‘n’ bongo sorcery workout ‘Venerate The Relic’, until Tony Iommi crashes proceedings to harsh the vibe with bad juju droning guitar licks. Nice.

That leaves us with closing number ‘Turn Towards The Sun’, all heat-haze shimmering psych with Deutrom‘s breathy and ghostly vocal hovering above a woozy guitar line that collapses into random electronic bleeping and blooping at its ending.

If there’s one thing to take away from Brief Sensuality And Western Violence, it’s that Deutrom fully understands the concept of negative space and the importance of letting good tones breathe. I’m willing to bet that striving to achieve the tonal perfection and fully accentuated nuance proudly on display herein near enough blew the man’s hat off, but it sure was worth it.

I could honestly listen to Deutrom‘s creamy powertones, crisp, jazzy lines and breathily expressive voice all bloody day, and, d’you know, I think I will. I’m pressing ‘play’ again and again…..