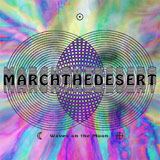 You know those GIFs you see of dogs sticking their heads out of car windows on the motorway? Figuratively, that has been me this year; with doom being one of my favourite genres and more acts popping up all over the world than I can dare to count, I’ve felt like a kid in a candy store and the seemingly endless conveyor belt of new acts to check out has been a little overwhelming.

It is much to my shame that ‘Waves On The Moon’ is my first run-in with Brighton based psych-stoner four-piece March The Desert. While I’ve heard the named bandied about I failed to pick up a copy of their self-titled debut; consider that rectified after having heard ‘Waves On The Moon’.

The three-track EP and second release from these guys covers an acid soaked spectrum, touching upon everything from Black Sabbath and Electric Wizard to Cream. Opener ‘Frown Curve’ took me by huge surprise – the first few opening seconds, if you’ve not listened to these guys before, give the impression that the listening experience is going to be something deeply atmospheric, not far from the likes of Dark Buddha Rising or even Sunn O))). However, this is all dashed upon the tell-tale opening tom tap followed by a thundering chug-heavy riff. The rest of the song meanders along a rumbling, fuzz heavy path, complemented by dirty, liquor soaked vocals which are not a far-cry from those heard of ‘La Sexorcisto’ by White Zombie. This a dirty little number and for those feeling anxious that the psych elements have yet to rear their heads, fear not, they’re just around the corner.

Title track ‘Waves On The Moon’ has clearly been at the hallucinogenics – it’s vibe is much more relaxed compared to ‘Frown Curve’ and is what I imagine it would sound like if Kyuss or Sleep turned their hand to lounge music. The production quality is much thicker; it almost feels as if you’re listening to this through a cloud, or more apt, smoke. The vocals take on a much more light and dreamlike quality; considering the gruffness portrayed in the previous track, it’s quite impressive how diverse Sam Grange’s vocals are. At the two-minute mark, the instrumentals step it up a notch and the improvised-sounding guitar solos and seemingly endless reverb provide the perfect backdrop for Grange’s now ‘70’s rock screech – adding yet another dimension to his already vast choral range.

The guitars take centre stage on closing track ‘Tabula Rasa’ – oozing elements of Jimi Hendrix, they push the vocals firmly to the back but don’t completely overshadow them, allowing for them to flow with the music and shift from gruff to lucid as needed. The only thing letting this EP down is that the slightly muddy quality of the production often means the drums are barely discernible from the rest of the music and while the retro vibe of the music rings through heavy and strong, it would be nice to occasionally (and clearly) hear what the percussion is up to. Nevertheless, this is a fine effort and one that would definitely translate well live on stage. I look forward to seeing this guys play a few shows and eagerly anticipate what they pull out of the bag for a full length.