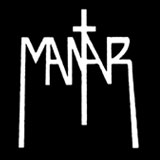 Mantar. There’s a name that conjures up images, mostly unwholesome if I’m honest. Sounds like a mythical beast, or possibly some kind of unsavoury euphemism along the lines of ‘man gravy’….if you catch my drift.

Both would actually be kinda fitting for this relatively fresh-faced German duo, though, as there’s definitely something both legendarily bestial and thick, disturbingly dark and glutinous about their sound. Like a terrifying Chimera made of boiling hot pitch and ejaculating molten magma into your ears, perhaps, if you can imagine such a thing.

But, back the heck up for a minute there, did I say Mantar were a duo?!? Yep, you read that correctly, only two seemingly normal human men are responsible for the thicker-and-heavier-than-a-whale-omelette-dusted-with-concrete tones on display on this wee platter – that’s guitarist/vocalist Hanno, he of the raw-throated roar and pulverising guitar tone, and drummer/vocalist Erinc, a man who clearly conceals one full-sized Dale Crover in each bicep, and they work together in dreadful harmony, like Burke and Hare, or Hindley and Brady with bigger amps and more sensible hair.

Despite having been together less than 12 months, this gruesome twosome have got their sound nailed down tighter than a Transylvanian coffin lid, Erinc providing the propulsion and sheer muscle and Hanno providing the grunt, thrust and, well, more muscle. That, my fine feathered friends, is a fuck of a lot of muscle, and believe me, there isn’t one ounce of fat here – Mantar‘s sound is 100% grade A quality Germanic brawn.

Despite having had a four track promotional EP up at their Bandcamp site for a few months now, this so-limited-that-it’s-probably-already-sold-out 7” single is the bands’s first actual release, and as introductions go it’s more-or-less on par with meeting your new neighbours for the first time as they wield a 15 ton wrecking ball aimed squarely at your front room. Thoroughly devastating stuff. Hearing these two tracks barely constrained by seven inches of black vinyl it’s not hard to see why they were recently snapped up by the hotter-than-Hansel-right-now Svart Records. Hell, Jarkko must have just about snapped their hands off at the wrist and let them keep the pen.

So, what do Mantar sound like? Well, I think it’s safe to say that they’re heavy, significantly heavier than two geezers have any right to sound, and tonally incredibly thick. The vocals are, as I said earlier, a raw-throated roar that hits like a cross between BuzzOv’en’s Kirk Fisher and a slightly higher-toned Lemmy, the drums are just brutal, clubbed to within an inch of total pulverisation, and the guitar is a veritable blast furnace of concrete-mixer churn proportions.

Both tracks on this 7”, ‘Spit’ and the flip ‘White Nights’, are possessed of the same qualities – they are dynamic, propulsive, thrilling, and in-your-face LOUD.

‘Spit’ kicks off with battering drums and churning guitar that totally puts me in mind of a harder-edged melding of Melvins, circa Houdini and the more rockin’ Stoner Witch tracks – think Revolve, Queen and Sweet Willy Rollbar – with a serious sludgecore heft. That Melvins thang runs right through the track, which is sure as shit no bad thing. There’s a rawness and urgency here too that just DEMANDS your attention.

‘White Nights’ hits with a swaggering groove that ain’t a million miles away from Iron Monkey’s ‘Bad Year’ before smashing your back doors in with a colossal wall of layered guitar that rears up like a wave of molten lava. Vocally here we’re verging on throat-shredding black metal territory, and occasional tremolo-picked and skronky guitar parts also possess that wintery ice-bound BM tone, atop the white hot totally-in-the-red chording.

Some of the secrets of how two dudes can make such a fucking colossal sound are peeled away for those who have ears to hear when octave/pitchshifting effects can be heard on some of those mighty axe-parts which goes to show that these boys know exactly how to get the most bang for their buck from their rig.

Based on these two tracks alone it’s not hard to see exactly why Mantar were snapped up by Svart and why, having heard them plus the other two tracks up at their Bandcamp site, I feel so excited to hear more from the gruesome twosome. Much more.