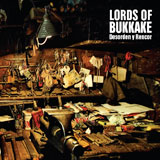 Wilfully nasty sludge from genuine Spaniards, as opposed to strange Japanese men who sing in spanish, here on the unpleasantly-named Lords Of Bukkake’s sophomore release, and their first for Israeli label of repute Totalrust Music – a label that knows quality doom when they hear it.

Emerging from a miasma of thrumming low-end noise, whining and indeterminate buzzing, we are instantly lulled into a false sense of security by a distortionless intro to first track ‘Llagas’, reminiscent of the intro to Soilent Green’s ‘Build Fear’, which is all slapback-reverb geetars, busy drums and understated yet menacing low-end. Of course, it goes without saying that the guitars begin to drift into discord before the amps kick in and a monster DOOM riff is unfurled, over which Querol howls his venomous tirade. One of the standout points of this track, and in fact the entire album itself, is the truly psychedelic guitar soloing that adorns it. On ‘Llagas’, it actually serves to bisect the track and acts as a focal point, guitarist Jaume Pantaleon duetting with a heavily delayed version of himself and laying down some off-kilter harmonies to sicken the mix a touch more.

Elsewhere on ‘Desorden Y Rencor’, ‘Alucarda’ is ten throbbing minutes of lysergic DOOM that rolls over the ears like a tank full of oscillators. The track throbs, lurches, throws up a Sabbath breakdown, bottoms out and then tumbles into a shrieking abyss of skree, splashing cymbals and white noise before lumbering back into life again, reincarnated as a more straightforward, relentlessly rolling version of Burning Witch.

‘Asco Deseperado’ picks up the pace a little more and smashes that rolling, driving, throbbing thing that the Lords do right into your face. Following this up with a very ominous, tolling Sabs-style riff, Pantaleon then lets riff with a MONSTROUS acid-soaked looping discordant riff, dripping with delay and oscillators, ably underscored by the glutinous bass of Querol and the also-impressive skin-pounding of drummer Sergio Linares, that give way to a spaced-out bout of soloing and seriously whacked out sound FX before its time to go back to the front again and get back in that riff-tank again.

Final track ‘Magia Necia’ follows on almost directly with the same riff as ‘Asco Deseperado’ closes with, except this time a layer of phased flanging is trowelled on and Pantaleon tops it off with more of that needling Helios Creed-style scrunge that he is so adept at. Once again, the track breaks down into a howling abyss of bass, over which Linares gets seriously busy with a swinging drum performance that carries through a groove-filled shuffle section and out into outer space again, which is where the Lords drag us and leave us, ears full of ringing, phasing acidic space guitar and a face covered in unmentionable goo.