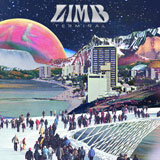 There’s a wave breaking over the heavy music scene. It’s rolling in tar-thick and slowly, smelling distinctly of bourbon, reefer and molasses. That wave is the current stoner and sludge uprising that’s been gathering momentum over the last few years, and Londoners Limb aren’t content to be swept along in the scummy depths, no sir; they’re riding the crest on a dinghy made of riffs and roaches.

That’s all well and good, but what is their debut full-length release Terminal actually like? The short answer is – a good fuckin’ time. Opener Three Snake Leaves sets the tone for the rest of the nine tracks on offer – a chugging, punchy number, propelled along by pacey snare rolls and buzzing bass tones, before being given that extra oomph by Rob Hoey’s gruff and throaty vocal stylings.

At a ‘mere’ 1:45, it’s a short yet satisfying first step. Following up is Ghost Dance, a big, immediate slap to the chops with some nice jazzy fills, moving into some easy moseyin’ stoner rock riffs. There’s an honest simplicity to what these fellas do, no airs and graces, and they sure as hell don’t need them. Micromegas is fantastically bluesy, with tub-thumping drum work from Thomas Mowforth, making a slick transition into dreamy, hazy melodies and a stomp that’ll have you bellowing along, pumping your pint above your head.

Dawn Raiders is a strong contender for song of the album. It’s led in by a fuzzed out driving bass riff, before toms and kick add tribal menace which breaks into huge staccato chugs. There’s a low down dirty chorus break, with a feeling of classic riffs given new shapes an purpose, before it shifts into a mellow, more reserved section that then shifts into high gear for a big close out. Down By The Banks is another stand out, a bluesy burst of infectious groove and irresistible tempo. Moody bass runs and a curiously sparse section are joined by some weird vocal effects which are in turn blasted aside by a rapid build-up into an absolute rager of a riff, fading out triumphantly.

Sleepwalkers acts as an excellent summary of the overall tone of the record – a curiously sunshiney, addictively positive set of lines and hooks that are undeniably a lot of fun. If you’re here expecting the darker, swampier side of the sludge experience, you’d better head elsewhere. But if you’re a fan of Desert Storm or Bad Guys and are after tongue in cheek yet perfectly executed towers of riff to bang your head to, you could do much worse than Terminal.