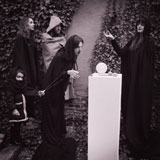 Music is often an expression of emotional outpouring be it joy, sorry or pain… possibly dating back to the time that the first lonely caveman got a rhythmic sound out of a rock and a log and bemoaned the fact his cave woman left him and took all the mammoth furs, it has been about catharsis.

On the other end of the scale are those who use music as a celebration, to revel in the joys of expression, of freedom and rebellion by tapping into the primal nature of mankind.

Philadelphia’s Lantern, spear headed by the song writing duo of Zachary Devereux Fairbrother and Emily Robb, very much fall into the latter category, a throw back to the sleazy punk glam of the 60s and 70s garage scene where Iggy and The Stooges and The Rolling Stones were kings. They are a band steeped in rock and roll and blues, yet hopped up on cheap booze, cigarettes, all night parties, sexual perversion and a sense of danger. This is no po-faced woe, its me hand wringing, Lantern came to get ripped, plug in, get all in your face with their snotty punk attitude, party til they drop and let the chips fall where they lay.

From the moment you hit play the band come at you full force with ‘Evil Eye’s shuffling up tempo assault that definitely recalls the glory days of MC5’s it’s retro sounding punk swagger, crazy sounds, horn sections and hand clap inflections. Emily spits and snarls, one minute sultry and seductive, the next minute deranged and confrontational. It sounds like the last great rock and roll party; the songs are hook laden and catchy, the music has a swing that is driven along by Sheer of Agony drummer Christian Simmons.

There are some great boisterous tunes on this album and it rocks all at a relentless pace for the first half as ‘King Of The Jungle’ takes over with a head banging stomp that is exactly what big band music would sound like if the musicians had smoked behind the bike sheds at school and grown up to get tattoos and flick knifes. At times it is hypnotic, deep and blues rich which evokes that hedonistic side and taps into that primitive part of the soul.

‘Where Are We Now’ sees Robb going all Riot Grrrl as the band step up the punk vibe and includes a blistering solo from Fairbrother as they take a psychedelic approach to their song writing. The base of the music maybe as timeless as the story of Robert Johnson and the crossroads but Lantern are trying to inject it with cheap amphetamines and speed to give it a boost in the arm. Sometimes this ambition can prove a little too much and the song kind of finishes in a bit of a mess, but I’m not sure if that wasn’t the point they were making all along.

The title track comes across like the Brylcreem sporting, vest wearing brother of ‘Spirit In The Sky‘ with a huge throbbing bassline that rattles your brain and is more hooky than the fisherman from I Know What You Did Last Summer and all it’s sequels put together. Like many of the stand out numbers on ‘Rock ‘N’ Roll Rorschach‘ this is a song that oozes with seduction and groove, taking that swaying, snaking rhythm section as the foundation and allowing the guitars and additional instruments to add flourishes of light and shade whilst Robb infects your mind with her powerful voice. If there is one criticism it is that they have taken this great foundation and beaten it into the ground on this song as by the end it does feel a little repetitive like it stayed around a minute or two longer than it needed to.

However it is not all brash and in your face as the band take a breather and show off a more sensitive side with the ballad ‘She’s A Rebel’, a tender catch of breath in the middle of a frenzied bacchanal that recalls the classic Velvet Underground track ‘Heroin’ and ‘The Conjurer‘ is a tasty slice of bluegrass with slide guitar, harmonica and almost spoken word cool vocals. If this interlude threatens to bring the party mood down then it is not long before the familiar assault is resumed on ‘Out Of Our Hands’ and the band unleash the horns again for ‘Heart In Your Tongue’ to close the album out in frenetic fashion and a good time feel.

And that’s the point; Lantern really aren’t reinventing the wheel here. They are taking something that has been done before and breathing life into it again, turning back the clock to when music was confrontational, cool and most importantly, fun.

Sometimes they do it for too long, desperate to hang on to the party vibe, but overall ‘Rock ‘N’ Roll Rorschach’ is a high octane record that would only fail to get you moving if you were dead.