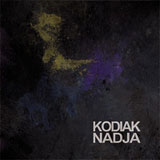 Ominous drones abound on this split release from Kodiak and the ridiculously prolific Nadja, with one track by each act. Actually, make that one very LONG track each….

First up is ‘MCCCXLIX The Rising End’, from Kodiak. Darker than previous Kodiak material, this track sees the trio opening up into murkier, more sonically textural waters than those of their first self-titled EP, adding a little piano into their pitch-black sound and opening up the feeling of space and depth within their music even more.

Congealing into earshot from a humming fog of hissing and clanging feedback, static and low-volume drone, Kodiak let the track build naturally – maintaining tension and varying the tones by thickening the guitars incrementally until the ghostly keys of a piano can be heard amidst the maelstrom of thrumming and howling, adding further depth to the sonic brew – before kicking in with a one-two THWACK of drums and dramatic powerchords ringing out into the blackness as ethereal echoing guitar lines chime out and writhe over the abyssal ambience.

Halfway through the 20 minute track, the space around the sound collapses in on itself and a vaguely more regular drum pattern asserts itself – guitars still locked into HUGE exclamation point chords – until that too begins to collapse under the twisting, shrieking guitar lines ringing out over the top, before slowly seceding back into the humming whirr of background drone and distant clashing and clanging of cymbals and the plaintive piano, then silence. Breathtaking.

The remaining half of this release is taken up by Nadja’s 20 minute ‘KITSUNE Fox Drone’.

Ummmmm…….well. It does EXACTLY what it says on the tin. Its a drone. Nothing more, nothing less. One long droning FX’ed synth/guitar chord, or possibly a loop of chords smeared together, overlaid with phasing/flanging tones. THAT is LITERALLY IT. For 20 minutes.

Now I have a lot of time for Nadja….when they can make the effort, but their high rate of releases means that the QUALITY of those releases inevitably begins to suffer. Consequently, this track just sounds LAZY – much like the Nadja ‘contribution’ to the last collaboration with Atavist – it just comes off like something that the duo have knocked out in literally the space of time it takes to actually PLAY the track. They may not have even been present, merely setting up the looper and pedals and then sodding off for a croque monsieur and a bottle of Labatts.

I’m sorry to be so ‘down’ on the Nadja part of this split, but it just is not GOOD ENOUGH, especially when placed next to the gloweringly majestic Kodiak track. Nadja REALLY need to learn to exercise quality over quantity, before its too late for them.