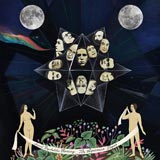 The ‘occult rock’ tag has been thrown around a fair few times over the last five years; in 2015 the term, perhaps thankfully, has not been quite so popular. With bands like Uncle Acid And The Deadbeats, Witchcraft and Ghost B.C enjoying mass popularity, it’s a perfect season for Jess And The Ancient Ones. They certainly have some passing similarities to the aforementioned bands – overdriven guitars, blues-tinged jams and Hammond organ solos – but they bring something new to the mix.

Or, rather, they bring something old in a new way. Their songs capture much of the complex instrumentation of the classic prog rock bands. I don’t know whether their many solo sections are improvised or heavily orchestrated, but they feel and sound like a band throwing everything together in the pot, live in studio and seeing what comes out. A wise man said that a good studio album should capture the band’s live energy, and Second Psychedelic Coming: The Aquarius Tapes feels like it accomplishes just that.

The album launches into energetic drumming and a recording of a discussion about some dark ritual and witch’s sabbath. It’s an honest opening, telling the listener pretty much everything they need to know: this is an album with big nods to ‘the occult,’ but with a lot of flair and frantic energy. The initial riff, with its balance of guitars and ‘classic’ organs, actually brings up comparisons with Gothic rock bands like Shadow Richtenstein. You might expect vocalist Jess to talk about dancing with the dead, but such obvious lyiricism is avoided in favour of something a little more interesting and obscure. Her delivery is great, full of passion and defiance, but with an uncanny edge that suits the album’s spooky vibe.

Jess and the Ancient Ones flirt with a variety of generic styles on ‘Second Psychedelic Coming...,’from Gothic rock to heavy metal and progressive rock. This is evident from the second track, ‘The Flying Man,’ onwards, with its combination of organ solos and flute harmonies. It’s hard to say if they lean towards Soft Machine or Jethro Tull, but it’s hard not to be fully enraptured by the melodious chorus as it gathers layers of instrumentation. And let’s not forget the fact that closing track ‘Goodbye to Virgin Grounds Forever‘ clocks in at an impressive 22:35. You might call it a ballad, but that doesn’t do it’s experimental inclusion of brass, spoken word and swells of ambient discord justice.

The whole album flirts with the blues, its jam sessions sounding like an extended Deep Purple free-form noodling session. Sometimes the solos can get a little too long and meandering, with guitars and organ keys tumbling over each other in wave of – admittedly catchy – classic rock. In Levitating Secret Dreams, for example, offers a brilliantly catchy chorus with a relentless guitar adding lick after lick. At times it follows the vocal melody and contributes to it, at other times it explores the key by itself. The Equinox Death Trip, for example, has an extended solos section which, whilst solid, isn’t mind-blowing. It makes up for this by taking a slower, more sinister approach to the classic rock formula, with an almost chip-tune sawtooth sound that cuts straight through any misty nostalgic memories of flares, ringlets and Blue Oyster Cult medallions.

Crossroad Lightening is a stand-out track on this album, because it too offers something a little different. The album frequently mounts to crescendos of instruments and speed, but Jess And The Ancient Ones break this up by providing a soulful blues track. The haunting gospel vocals, the rhythmic drumming and the acoustic guitar are atmospheric and conjure that enduring image of meeting the devil on a dusty crossroad to sell him your soul (if you are a Metalocalypse fan). The piano takes a backseat role, giving the song more room to breathe. It’s a welcome rest before the equally welcome The Lovers, a fast-paced and frenetic flurry of notes that are straight-up classic rock.

If you want some well-written and catchy classic rock riffs with a slight Horror edge, look no further than Second Psychedelic Coming: The Aquarius Tapes. Each member plays their instrument with great skill; the drums are energetic, the guitars packed with overdriven licks, and the vocals cry and lull with equal intensity. At times the insistence of constant rhythmic jamming can be claustrophobic, but there are plenty of atmospheric pauses for you to catch your breath and drift into the psychedelic ocean.