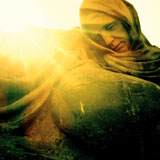 Upon first hearing the details of Jucifer‘s new LP ‘за волгой для нас земли нет’ (or ‘The Russian Album’ if you’re not fluent in the language) I was practically foaming at the mouth to hear it. I first became interested in the band via their genre-spanning double-LP concept album about the life of Marie Antoinette, L’Autrichienne, because… well, just re-read that last sentence back and think about how many albums there are like that. That’s right, just one.

Jucifer are an entirely unique proposition, the only married couple who travel the world in an RV for the sole purpose of redefining what you think you know about volume. To see them live is a visceral experience, you feel the music as much as hear it.

After they returned from spreading the gospel of Amp Worship on their first tour of Russia in 2011, the first-hand experience of the country inspired the recording of an album dedicated to the people, the place, and the story of Volgograd (more commonly known as Stalingrad).

‘за волгой для нас земли нет’, which translates to “Beyond the Volga there is no land”, is another epic historical concept album from Gazelle Amber Valentine and Edgar Livengood, the likes of which no-one but these two veterans of volume could create.

Opening with a spoken word recording in Russian, the retelling of the Volgograd’s history, from Tatars to Stalin, and the onset of imminent war against the Nazi menace. Not all listeners will understand the words, but all can appreciate the message; the weight of the history. The first track proper ‘Песнь просыпающегося города / Song Of The Waking City’ opens with a gentle guitar and cymbal taps, the effect is of the calm before the storm, before it hits with an opening salvo of distortion while the drums lay down steadily building covering fire. It isn’t until ‘ЛОЖЬ ВО СПАСЕНИЕ / White Lies’ that the full assault is unleashed, Edgar’s drums blasting your hearing to smithereens as Amber’s growls announce the arrival of the invading force to the city. The interjection of spoken samples in Russian into these first tracks is a little jarring, serving to break the momentum a little, but from the woozy rumbling stumble of ‘Боритесь, чтобы жить свободно / Fight Hard Live Free’ onward it’s not as prevalent.

The album really hits its stride with the blackened bizarro march of ‘Ни шагу назад! / Not A Step Back’, it’s stacatto ratatat rhythm recalling the rifle fire caused by Order 227 itself. Order 227, probably one of the most infamous of Stalin’s wartime policies, was the declaration that “Panickers and cowards will be eliminated on the spot. Commanders of companies, battalions, regiments and divisions, along with their commissars and political workers, will be considered traitors to the Motherland if they retreat without orders from above”. I don’t want to turn this review into a history lesson, but you’ve got to admit that man’s inhumanity to man makes for far more interesting subject matter for heavy music than the usual Satan, weed and women fare, right?

One of my personal highlights of the whole album is ‘Эволюция I: Кочевники / Evolution I: Nomads’ an anthem of pure doom, with Amber’s voice alternating between an ethereal shimmer and a putrid expulsion, extolling the valiance of Volgograd’s defenders with words that seem to echo the band’s own nomadic virtue. When Amber’s contrasting vocal styles intertwine towards the end of the track, its almost impossible to believe they come from the same species, never mind the same person.

Opening with a cry of anguish and a crash of cymbals ‘Королева – оленьи рожки / Queen of Antlers’ is a sludgey trudging ode to the female Soviet snipers and saboteurs who helped wrest back Russia from the Nazi menace. When Amber’s voice soars to a haunting cry of “Queen of the antlers tonight, my will is your tomb…” it’s a sound like the souls of all 800,000 female combatants rising in defiance. It’s one of those chill-up-your-spine moments that make you appreciate just how powerful music can be. Closing the album are the ambient sounds of war and destruction that soundtrack ‘Patriotic Song’, which are offset by guest vocalist Maria Kotrunova’s eerie lilt, which seems to embody both hope and hopelessness, and the album’s themes as a whole; the futility of war, the hostility of retaliation, the triumph of victory.

From the staggering and shrieking minute-long blast ‘Дом Павлова / Pavlov’s House’ through to the churning and chanting drone of ‘Сибирь / Siberia’, Jucifer demonstrate their chameleon-like ability to cast their metal into any and every mould to stunning effect. It’s this diversity that enables them to tackle such weighty thematic subjects set to the sounds at the harshest end of the musical spectrum, and to hold the listener rapt.

I mean, on paper (or screen for that matter), how appealing does a concept album about Russian history set to a mix of everything from grindcore to drone sound? Exactly. But Jucifer’s skill is that they take such unwieldy ingredients and turn them into one of the most interesting albums released this year.