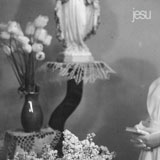 Anyone who is an aficionado of extreme music is familiar with, and loves, some of the work that Justin Broadrick has produced. His presence and influence has towered over extreme music for nearly 25 years, from the insane Grindcore blast of Napalm Death’s ‘Scum’, to the misanthropic mechanical stomp of Godflesh and numerous varied and challenging projects such as Techno Animal, Palesketcher and of course, Jesu.

Heavily influenced by the DIY punk and industrial scenes of the late seventies Broadrick aspired to meld heavy guitar music with the likes of Aphex Twin’s ‘Digeridoo’ and Run DMC to create something unique and from the late eighties used the powerhouse industrial grind of Godflesh to twist music into terrifying new shapes. Following the collapse of Godflesh and Justin’s mental breakdown after the release of the ‘Hymns’ album in 2001 it seemed like the music world had lost one of its true innovators. Thankfully he re-emerged in 2003 with the Jesu project, named after the final song on ‘Hymns’.

Unlike the cyborg howl of his former incarnation, Jesu‘s sound was a heavily layered and textured mixture drawing from and incorporating an eclectic mix of influences, ranging from ambient music, drone doom, to shoegazing, down tempo and industrial music which sought to explore musical themes and movements than had more in common with artists like Isis and Pelican.

Over the last decade Broadrick has worked solo or collaborated with on/off members Ted Parsons and Darimuid Dalton to release numerous albums and EPs that often resemble a painter refining and honing their brush strokes, each using the same style but subtly different, fixated on the elements, focused in a new direction that has seen the band mutate from the more organic sounds of the eponymous debut to the heavily electronic take that was 2009’s ‘Infinity’.

With the emergence of his new JK Flesh and Palesketcher projects, the Godflesh mastermind proclaimed that Jesu would be returning to a more guitar driven sound and as such we find ourselves in 2013 with the release of ‘Everyday I Get Closer To The Light From Which I Came’.

There has been a tenancy with previous Jesu releases to explore singular themes to the point of exhaustion. Patterns of riffs, beats that seemed to go on for days, like drifting in a flotation tank or experiencing a form of sensory deprivation. These journeys have at times been fascinating and at others have seemed to overly labour the point.

However the glacial movement of the music, the subtle exploration through repetition is often focused through a prism, being up close to a track and trying to break it down doesn’t give the complete overview and sense of what Broadrick is trying to do with Jesu, kind of like the long story arc of a TV series – it doesn’t always necessarily stand out from individual episodes and as such ‘Everyday…’ is another release that has to wash over you and be absorbed rather than be quickly dissected, not to mention placed in context with the body of work that has gone before.

It starts off with the grinding fuzzy chords of ‘Homesick’ the weighty drone like guitars balanced out by a delicate melody that makes the track feel comparatively light and lush, almost indie shoe gaze which is a timely reminder than for all the heavy influences of bands like Isis and Pelican, this project could equally rub shoulders with the likes of My Bloody Valentine.

Often I find myself mentally exhausted by the focus of Jesu, the intensity surrounding the relentless obsession with the most minute details of the song writing formula, but here the opening track has soft, rich, clean vocals imbibed with positive lyrics and does not feel as dense as say 2007’s Conqueror. The elements of the track build and flow so that the subtle changes seamlessly blend into the music creating a very tranquil experience.

This is a theme that continues with ‘Comforter’ as the heavy aspects are done with a deft almost poppy touch, both deflecting and reflecting the undertones and yet appearing on the surface quite light and fly away in comparison to the dirty drone that could have been expected. If this sounds like some art house project rather than a song review then you must be new to the Jesu vision as the sonic detail is as complex as the animation for the Final Fantasy anime movie.

The semi-title track ‘Everyday’ starts to introduce a darker sound, the grinding bass ushering in an unsettling edge, the light and airy sonic flourishes that ran through the first two tracks become unsettling bends, echoing and changing what has been heard before. The EP starts to feel denser as if there is a gathering storm, ushering in a mournful ambiance emphasised by the echoing vocal delay.

’The Great Leveller’ is almost the fulcrum of the 5 songs; gentle piano chords give way to military style drumming which in turn gives way to crunching guitar. Throughout the seventeen minutes the instruments all mimic and reflect each other as the piece shifts through carefully designed movements, painstakingly constructed with a singular vision in mind before it is washed away in a haze of ambient electronics with closer ‘Grey Is the Colour’.

The big thing I find here is that Jesu is as much about art as it is music. Sometimes Broadrick comes across as genius and sometimes you feel like he can’t see the wood for the trees such is the convoluted nature of the music. Of course you have to stop and admire the process and ‘Everyday…‘ is personally a lot more palatable than some of the recent releases and brings back a more guitar driven sound that was lacking which made this a more enjoyable listen. There are some absolutely sublime moments on this release and then there are some that leave me utterly cold which probably speaks more to my missing the point or lack of patience rather than any condemnation of what is on offer here.

As far as Jesu releases goes, this one for me is an improvement on the last few but not as satisfying as the first couple; with the resurrected Godflesh immanent return to recording duties, last years JK Flesh album and the million and one other projects that Broadrick has going on you can understand why he can dedicate so much focus to this particular outlet and pursue his vision as far as he can, but from an ‘end user’ point of view it can get lost in translation.

I love Jesu, but at times it’s a shame it can be so much effort to listen to.