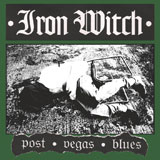 Having reviewed Iron Witch’s previous doses of aural violence I was keen to hear how they have progressed in the last couple of years. I think it is fair to say that Eyehategod worship still features heavily at the core of their sound but these Liverpudlian sludge masters have definitely moved on from the swampy Sabbath sounds of their earlier work.

Opening track “Gunshot Residue” still throws down some filthy, weighty sludge grind but marries it up with a more hardcore approach so the band sound less like 70’s throwbacks gorging on PCP and come across more visceral and attacking…I must say it suits them.

Second track “Exceed The Dose” is far more what you would expect from these guys based on their previous works as it grinds along on a filthy, vermin infested doom riff though it turns on a dime when the vocals kick in and the hardcore element is thrown right in your face like a ton of shit.

Flip the wax over and the title track kicks off in more traditional doom/sludge territory with a mighty, grinding riff that, actually, isn’t a million miles removed from some of the stuff that Sigiriya have done on their debut album. The comparison flies out the window however when the bile filled vocals kick in. This track provides the logical segue from their earlier, more overtly doomy, Sabbathian work to their leaner, harder, punkier sound.

Iron Witch haven’t just tightened up their songs, they’ve also tightened up their sound. The production here is cleaner and clearer than they’ve achieved before but far from detracting from their sludge grind it serves to add extra depth and power, particularly in the guitar department as the sound here is a massive, oppressive wall of crushing fuzz.

Iron Witch are still the UK’s answer to Eyehategod and arguably the finest sludge band currently doing the rounds in this country. Now they have hooked up with Thirty Days Of Night Records they could well push the boundaries a little further. They are gradually going from being ones to watch to being the ones others will follow.