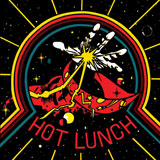 Hot Lunch – UK psychedelic lynchpin Julian Cope once said flattering words about them. So flattering, in fact, that his devotees (myself included) immediately checked them out. Turns out he was right (isn’t he always?) Since their formation, they’ve been picking up plaudits and sore necks galore – their contagious, riotous proto-metal cacophony is a fucking righteous racket deserving of anybody’s attention. Especially your neighbours, if you dig what I’m saying…

Ollie Stygall’s glowing review of their debut album for this here site was a stunning indictment of the infectious nature of this four-piece’s hard-rocking ethos. He threw names out that only an idiot would ignore, and he hit it hard and true every time. You can hear the slinky, buzzing menace of the Detroit sound (especially High Times-era MC5 and Easy Action-era Alice Cooper Band, not so much Stooges but who’s counting?) and the heaviosity of bands like Grand Funk Railroad and Blue Cheer.

But I’m damned if I don’t keep hearing shades of Deep Purple (cough cough) scattered throughout their spookily-authentic rock ‘n’ roll groove-thang. And obviously that little-known Birmingham band we all know and cherish… their name escapes me at the moment, I’ll get back to ya.

Regardless, comparisons are for squares, reviews are for pears:

Hot Lunch’s new five-piece buffet ‘House Of Whispers’ exists completely on its own dinner plate of awesomeness. Opener – and title track, I guess? – ‘House Of Whispers’ has so many textures and flavours it’s like those magical sushi-conveyor-belts at restaurants I can’t afford to eat at. It’s that exciting – a riff drops by for a few bars, then pisses off to be replaced by a different lick then another and another, then hey!…is that the same riff as earlier, or something different? Who cares, it’s just as tasty as the rest ain’t it?

‘There’s Nothing Like Revenge For Getting Back At People’ confused me for at least one whole minute (I was trying to work out what the fuck that title meant, I didn’t get anywhere…) It’s a brutal concoction, alright. Shea blows at least three vocal chords during the tune, he hollers and screams and growls and yowls away like a man possessed. The drums are set to ‘stun’, the guitars to ‘fun’ and there’s some seriously flavoursome Geezer worship rolling out of Karr’s amp… AND there’s a section that reminds me of ‘While My Guitar Gently Weeps’ for some reason (and ‘Snowblind’, but then again, that borrowed tonnes from George Harrison’s masterpiece, so it’s a chicken-and-egg scenario…)

The next track is another humdinger – ‘Hooray For Everything’ is a live-wire rocker with a galloping rhythm. That’s right. Galloping. The guitar is fuzzy, the bass thumps straight out of the speakers, the drums clatter and bang around your cranial cavity like you could only dream of. And boy, when Shea starts singing the guitar melody over the actual guitar melody, some kind of magic happens. “Do-do-doo-do-do-doo…” It’s got a punkier edge than the other tunes, and that only sweetens the deal.

The vocals on ‘Ballad Of Heckler Hill’ take turns between Lizard King beef and Zappa alphabetti spaghetti, such is Shea’s crazy talent. The music itself gets down and dirty and light and flirty, mixing Zeppelin heft with Sabbath sex appeal. It’s probably the maddest thing you’ll hear this year, as though they made a musical version of Monty Python and The Holy Grail. In five minutes. With added BBQs.

It turns out they saved the best for last (so did Sabbath on Vol 4, Kiss on Rock and Roll Over, Deep Purple on Machine Head, Grand Funk Railroad on Closer to Home, The Doors on… all of them, and so on). The track I’m on about is ‘Period Incorrect’. It showcases all of the things we love about Hot Lunch: Wah-wah psychedelia, beefy riffing, rock-solid drumming and golden-voiced crooning. Shea’s performance in particular is killer, and whoever writes the lyrics deserves a beer or three: “Everybody says/They wanna go to heaven/But nobody is willing to die.” Poetry, ain’t it?

For an EP, this has more than enough variety than most bands get on an entire record. Riff after riff of solid gold, bass lines that you can measure on the Richter scale, vocals that are so hot they could fry an ice-cube and drums that are locked down tighter than Paul McCartney’s toupee… it’s all here. It’s only an EP, but if you play it three times, you can pretend it’s an album. And what a fucking awesome one it is too! I look forward to their next full-length and I look forward to the day they go full-on 70s and form a supergroup with The Shrine that will bring about a metal armageddon. If someone from Tee Pee is reading this, or indeed if any member of Hot Lunch or The Shrine is reading this – for the sake of mankind, make it happen!

PS. I was going to do a ‘serious review’, but it just seemed ridiculous to be having this much fun listening to something and not even attempt to convey that in the review. Thank you, Hot Lunch.