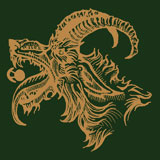 It’s pretty rare to come across a band that stands out as a distinct entity these days, but it does happen! In an age when many seem happy to tread a path already worn down by an onslaught of musical sheep, Finland’s Horse Latitudes have come up with a sound that is fresh and exciting, whilst at the same time paying reverence to the bands that planted the musical seed in their trailblazing minds. “Black Soil” is their third full-length in four years, and it’s frankly astonishing that everything this trio have done has remained of such a consistently engaging quality. Whether wiping the floor with an increasingly turgid Hooded Menace or regaling us with well thought-out works of art such as “The Awakening”, drummer/chanter Harri and bass players (no, not a typo!) Vellu and Heidi are self-assured enough to stand head and shoulders next to some real heavyweights – they have left no doubt in my mind that this album is going to top many best-of lists when December comes. Why? Read on…

Visually and thematically, this three-song behemoth of an album follows on from where the previous two opuses left off, and builds on the sounds and concepts that preoccupy this trio of morbid Finns. Combining the sheer brutality of Hellhammer with the pagan mystery of Amebix, the Horse Latitudes sound is empowering and entrancing. The trio of songs that make up this album seem to tie in with the mysterious iconography that adorns the insert, an other-worldly atmosphere that never lapses into farce or caricature; having said that, my knowledge of such esoteric subjects is (to put it mildly) limited, but the scent of bullshit is as easy to detect without a library to rival that of a zealous Wiccan as without. “Black Soil” is easily construed as an ode to rebirth (the darker the soil, the more fertile it is, right?), almost a metaphor for the ouroboros that is the awakening from ashes that occurs in nature every April (I reckon it’s no coincidence that the entire B side is occupied by a song called “Eternal Spring”). A tinkling of bells starts the record off, before a series of slow, pummeling, primitive and powerful riffs assault the listener’s ears, courtesy of Heidi and Vellu’s bass playing. The fact that this band have two bass players and no guitarist is far from being a gimmick, it has given them a unique sound which is like hearing doom reduced to its bare elements, and all the more powerful for it. Locked in total sync, their fingers glide over their fretboards, subtle differences in frequency suggesting two players in total control of their sound. The simple mastery of the bass playing on this album is enough to leave you well and truly awestruck.

The second track on side A, “Forest” is like a chanting ritual around ancient stones– the only band that came even close to this morbid, ethereal sense of spiritual creepiness is Spain’s criminally underappreciated Orthodox, who, in a very different way, use their music as a way of channeling otherworldly forces into works of art that function almost as mantras. The whole album settles into an uneasy peace for the start of side B, which consists of “Eternal Spring”, morphing from sparse minimalism to a crashing, heart-stopping crescendo punctuated by Harri’s superb drumming and otherworldly ululations (think John Alman crossed with The Baron), it’s the first proper goosebumps moment I’ve had from a heavy metal record this year, and I can assure that it’s ten times as powerful seeing the band pull this song off live – quite how Harri survived a whole tour of such punishing playing is a mystery to me.

What I’m trying to say, in a very roundabout way, is that this LP is exceptionally good. Actually, it’s not hyperbole to state that it’s just plain brilliant. It’s rare for a record to impress me quite on the level that “Black Soil” has – it contains everything that made me listen to the likes of The Butthole Surfers when I was growing up; it scared the shit out of me the first time round, and lingered on my mind, I couldn’t listen to other music without feeling restless until I had “cracked” this record. The concept and execution are so deceptively simple, but the content feels so profound. Life, death, riffs, melody, dissonance, organ, and a guest appearance from none other than Sami Hynninen – utterly perfect.