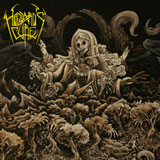 If you open an album with a riff that instantly puts me in mind of ‘In The Grip Of Winter’ by Autopsy, you’ve pretty much won me over. If you then proceed to knock out an album’s worth of tracks that smush that dirty, feelthy slightly askew Autopsy tone with equal parts balls-out-pedal-to-the-metal High On Fire-isms, Buzzov-en-esque dirty crust-punk fury and some more-than-likely drug inspired prog spazzout moments then the name of your band is Hazzard’s Cure and you’ve pretty much got me for life.

Filthy hessians that they are, the reprobates who make up Hazzard’s Cure have a long and distinguished shared lineage between them made up of a number of bands from the ridiculously fertile Bay Area of San Francisco – yes, that’s right thrashers, THAT Bay Area – and this heritage shines through brighter than a brand new pair of bright white hi-tops.

Sure these heshers can thrash it up with the best of ’em, but their real strength lies in those industrial strength Matt Pike-isms double-teamed with Gilman-style punk-rock fury – all one-two-one-two drums, hoarse, throaty vocals and thick, chewy metal riffarama – and liberally smeared with stop-and-turn-on-a-dime tendencies and a full-on lysergic ‘tude.

After gnarly opener ‘Psilocybin’s crusty Autopsyisms, ‘Meet Me At The Mountain’ creeps in on a Sabbath bassline before smashing in with off-kilter harmonising and wordless vocal chants, psychedelic flourishes and a very tasty solo. The sky is well and truly caving in.

By this point, you’ll be pumped, primed and moist, ready for ‘Tossed And Dethroned’ to smash your back doors well and truly in with a mix of chugging Pike/Buzzo-esque geetar, throaty Cisneros-drone vocals and schizoid acidic prog frenzy breakouts that ultimately swing into balls-to-the-wall dirty thrash fury.

The dirty-ass thrashing and scathing chug continues through the first half of ‘Clashing Of Hordes’ – a track that totally reminds me of Floridian faves Shroud Eater – before receding into a vaguely contemplative, moody, dark quieter section that gives way to another set of sweet, sweet soloing and a direct lead in to the speedy guitar interweaving of ‘Wolves Banquet’.

From here we segue straight into the complex barbarian-prog of ‘Prayer Of The Hunted’, chugging and hurtling along at a driving pace, breaking out into sudden blastbeats and reaching early-Vio-Lence levels of ‘Jeezus-Christ-We’re-Out-Of-Control!’ thrashing at several points.

Obviously, this kind of crazed fist-banging mania can’t be kept up for too long, and so it is we reach the substantially slowed-down, wide open spaces of the initially-glacially paced closer ‘Great Dishonor’. Of course, it almost goes without saying that what starts at a sedate pace becomes, basically, a frenzy of Black Metal proportions by the time the whole thing draws, sadly, to a close, band spent, drummer probably completely shagged-out, ears ringing, shit-eating grins all around.

If you like it dirty, trippy, aggressive and highly likely to induce a colossal bangover, then Hazzard’s Cure is for you. Cure for what though? Hmmmm…I dunno, but I reckon the cure for being FALSE would be pretty spot on.