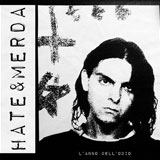 Hate & Merda are a mysterious Italian duo specialising in an interesting blend of sludge, psychadelia and atmospherics. Their debut album’s title is roughly translated as The Year Of Hate, and its barren depths and bleak, nihilistic soundscapes are the perfect soundtrack to every negative emotion you can feel but in a totally cathartic sense.

Ascoltare Con Dolore / Carne Gotica gets things underway with a whining barrier of feedback and builds gradually with big, doomy chords and splashes of cymbals. It moves into a threatening, foreboding chord progression that showcases their killer sludge guitar tone nicely. The main riff is towering, dragging itself along before breaking up into a chugging, HOWL-esque form that is overlaid by some truly tortured screams. There’s some heavy palm muting, and it’s immediately clear that one of Hate & Merda‘s strengths is their ability to subtly vary riffs and themes within the space of a track whilst maintaining a central, core tone.

Second track Pioggia Di Cicatrici E Sogni Negate’s distant opening riff becomes a fluid, stomping beast that’s underpinned and spurred on by pounding drums. One of the major criticisms that could be levelled at this record is that the drum production is a little too brittle, and lacks a truly bassy, dominating presence. The furious tempo drags us into weighty, palm muted chords and a slower, sludgier section with a reappearance of the manic, maddened vocals. Pietàcomes in with a jangly riff that passes through rolling, thundering drums into a section with such deep groove it would be impossible to resist headbanging along. It also showcases some of the bands more delicate leanings, with some vulnerable guitar work and a spoken-word sample, raising its head before being sucked back into the darkness by the intensity of the drums, only to break free again to close out with motes of ethereal shimmer.

L’eternità Di Un’estate Terribile progresses from a subtle opening through added layers of drums and heavy guitars with spoken word vocals before the bite of the main riff comes in, producing utter, glorious chaos of random drum smashes and screeching guitar feedback. This alternates with the more restrained guitar line, off and on, before morphing again into ragged screams, feedback layers and synths. Last track Veglia Di Condoglianzais the most foreboding, with droning vocals, oppressive synths and lots of negative space, but it also feels the least realised, and seems to drag on much longer than it should.

The Italians have done something remarkable here. With their first effort, they have crafted a confident, beautiful collection of tracks that are evocative, fragile yet intense, blistering yet restrained. They have a keen sense for the dynamic, as well as the dramatic, and it’s a record that is as rewarding a background noise as it is when intensely listened to. For a debut release, it bodes incredibly well for things to come. 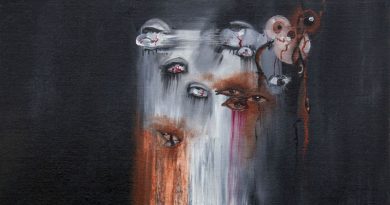