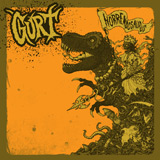 Queens of the Stone Age, Mastodon, Primitive Man, Dinosaur Jr, and even errr… T-Rex; heavy rock bands and the Neanderthal-infested Jurassic period sure do go together like Jeff Goldblum and Hollywood blockbusters don’t they? Doyathinkhesawus? Well I’m pretty damn sure no-one, I repeat NO-ONE, saw this beastly bastard of an album title coming. Horrendosaurus! What even is that?! It makes my face hurt just thinking about it and what on earth it could possibly mean. Oh we‎ll, fuck it, who cares. This is silly song titles and big naff-off rifforama territory, so let’s just jump into our turbocharged Jeep Rhinos and blast off into the jungle, rifles at the ready!

If you live in London, like smashy smashy doom music and haven’t come across Gurt by now‎, then you must surely be either stupid or dead. Rising up out of the smokey swamps of South Brixton back in 2011 with the stonking, yet blues-smeared, debut ‘Redwin’ EP, Gareth Kelly (vocals), Simon Edwards (drums), Jamie McCathie (guitars) and John Hughes (bass) quickly found themselves punching towards the forefront of Britain’s Generation Sludge and wreaking havoc around pubs and clubs across the South in the process. Fast forward a few EPs and splits, a promotions agency, a mini record label and a new string section in Rich Williams (guitar) and Dave Blakemore (bass) and what started out as a metallic pilgrimage to the Earth’s core with a crusty, New Orleans bounce has become… well, actually more of the same but with way better songs. With McCathie still involved in the songcraft from his base over in the US-of-A, Gurt have become a monument to the art of dirty riffage played with a clean and precise cutting edge to their rhythms. Influenced as much by Pantera and COC as by Raging Speedhorn and Eyehategod, its Gareth Kelly’s definitive and deadly rasp that remains the topping on Gurt’s cake of solid, chunky groove-metal.

Spitting into life after a sampled intro on the brooding opener ‘Gardening With Cthulu‘ ‎(don’t expect the titles to get more serious than that… because they won’t) the four-piece chomp at the bit of doom with Edwards’ spiky drumlines and Williams’ determined, singularly coiled riff slowly unravelling between your ears. Kelly’s raging bark serves as more of a warm-up or aperitif for the violent chugathon that’s about to unfold.

‘Sludge Puppies‘ (yep, I told you so!) snaps into life with a commanding four-tap and a face-breaking intensity as Kelly’s throat tears from his body and lands under your turntable needle with all the grace of a collapsed hippopotamus. There are not many people who could bellow “Die Motherfucker!! Die Motherfucker!! DIIIIIIIIE!!” which such a convincing threat to your personal safety, yet keep a smile on your face as the lion-maned frontman. But yet he manages to pull it all off with a stylistic ease. Edging the bass down into a crawl for the final moments of desolation, ‘Sludge Puppies’ hammers home as Gurt‘s most brutal song to date.

The thrusting title track brings the bluesy edge back to the fore as Blakemore and‎ Williams lock into an impressive groove atop Williams’ thudding kick drum. Kelly sits back in the pocket more on this angry little number which at times does actually sound like a dinosaur stomping on your tiny mind with gleeful abandon. The swinging guitars continue to steer the ship on the swaying sludge behemoth ‘Eves Droppings‘ (probably my title pick of the bunch) as the drums hit harder, Kelly screams harder and the whole damn band plays harder to culminate in a juddering conclusion which serves as a purist sludger’s homage to the much missed Iron Monkey.

‘Winston‘ and closer ‘Spiced Doom‘ (I’m starting to crease up now) grind out a further ten minutes of chunky, beefy, soupy, toasted soldiers-filled gore. More of a crush to the back of your spine than a snap to the neck, Kelly’s howl is now almost beyond the realms of human scope as Williams’ guitar crunch fades out the record in an uncomplicated, don’t-fuck-with-me fashion with Edwards’ annihilated snare bursts sitting tightly on his shoulder.

The ‘Hobore‎aper‘ (make it stop, I’m in serious pain now lads!) is a catchy little tramp slayer that’ll make your bum shake as much as your chest pump. Sometimes the simplest riffs are the best and Williams and Blakemore keep it short and sharp, yet bulldozingly forceful at the same time here. The fade-out is almost a stadium sing-a-long in tune, yet is roared out by Kelly in the most deafening, windpipe-melting fashion possible. All together now… woahhhhh! Ohhhh ohhhhhh! Wraghhhhhhh! …Or something.

Another short yet plucky number, ‘Exscriptus Spiritus’ sounds almost like Ghost jamming a murky black metal song in its opening exchange of downtuned dingy riffs and a colossal amount of bass through the amps, all helmed by Kelly’s sadistic grimace behind the mic. It’s an unusual track for this groovy, sexy act, but remains for me one of the most serrated teeth in the gaping jaws of the Horrendosaurus.

‎Despite the LOL-a-minute of the song titles, ‘Horrendosaurus‘ is a great debut from a solid-as-anyone UK act. Whilst you do sometimes want for more of a change in guitar tone, Kelly’s genuinely intimidating vocals do make up for any occasional lacking of sophistication in some of the riffs.

Like sludge? Welcome to Horrendosaurus Park! You won’t be coming back alive. 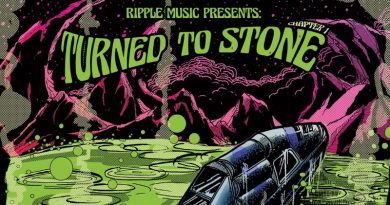