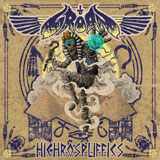 Groan’s new stoned out release Highrospliffics harkens to a kind punkish, anthem-calling, but metal, pre-genre label mess. I say it’s a mess in a good way, though. I saw, or heard, this as a call back to the old, early 80s UK metal. At that time, when the metal movement was slowly evolving from the NWOBHM to more aggressive, punkish, rawer, heavier, faster “newness”, there wasn’t a specific label for these melded sounds yet back then. Things were being tried out. Different attributes were being combined to make that whole tsunami of a metal movement that wasn’t pussying out, but rather doing what each of those individual bands wanted to do: to please themselves and stay true to their hearts and music. In Groan, at once I heard Tygers of Pan Tang. As with the Tygers, the sound is definitely in your face metal tied up with a bow of a punk screaming for vocals.

Humor, seems to be a big factor for the lyrics. Nothing is really taken seriously, even themselves. If you have any kind of an objective capacity, I’m sure you’ve laughed at some of the goofy shit that some of the old, and even new, heavy metal bands put out. Groan’s new EP Highrospliffics references all of those silly topics left and right. That’s alright though; it doesn’t take the joke so far as to shoot themselves in the foot. Unfortunately, there have been too many instances of Steelpanther, perhaps the Darkness, and bands of the same ilk playing out silly mock metal hero roles to a real life Spinal Tap degree, Highrospliffics sort of does the same, but is quite serious about the ass-kicking duty that they set out to fulfill. They do that. The solid metal riffs, solos, raw vocals, and heavy rhythms that most of us adore in our beloved metal shine is here. This is a good, tight band.

The songs themselves, on their EP Highrospliffics, all four of them, never lose, what I’ve come to discern after repeated listening’s, is their unique sound. To me, that says that this band knows who they are and what their mission is. Now, I can tell without looking at the title, the name of this band only by their sound. In that, I must commend them. So many bands come out trying to ride on the coat-tails of some successful formula that has come before them. I can tell, Groan respects their metal duties, but will NOT take them too seriously.

You most likely have heard bands in concert play some anthem that they encourage the audience to partake in; for example Skid Row and their: “we are the youth gone wild!” call to arms. Personally, I hated that kind of shit. It embarrassed me as a metaller to have some pussy band try to carve out some success with a silly chanting song using my metal; Warrant being another good example. Groan takes note of this and holds it up to the light. Buried In Leather, the last song on their EP, does an exemplary job of doing just that. Simply the title has to leave true metal heads grimacing in its stupid overly diluted metal-genre phrasing. Come on now, as wonderful as leather is, and being buried for that matter, Groan note how satirical it just has to be. If it wasn’t, there’d be a problem with credibility. Buried In Leather exemplifies this with its big metal-crowd-chant-inducing call: “heavy metal thunder, it’s the only way…”. Any other band singing lyrics like this nowadays and taking itself seriously would bring back all those feelings of disgust and embarrassment that occurred in the eighties when heavy metal bands sang about shit like that and were serious.

In all, I’m glad for a band like Groan to exist. They keep true metal alive by exposing the silliness and the ass kicking that the genre has been associated with. Oh, and I almost spaced out a very important fact. There can be no doubt that this metal is best served with stone, er…