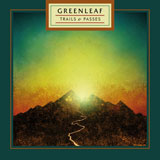 If you have to be brought up to speed on Greenleaf, you’re way behind the power curve; they’ve become somewhat of an institution in the underground (Swedish) rock scene, and ‘Trails & Passes’ sees them driving into an arena where the crowd has no choice but to wake the fuck up and take notice. Over the course of fifteen years and five outstanding albums, including the awesome ‘Secret Alphabets’ (2003) and ‘Agents Of Ahriman’ (2007), we’ve watched the band transform from a riff rocking side project to a multidimensional genre defining act. Mainstays Tommi Holappa (guitars) and Bengt Backe (bass) have been the consistent axe wielding “grand puppeteers“, orchestrating jam after jam after jam with a constant influx of top notch musicians to help realize their vision. Now joined by vocalist Arvid Jonsson (who replaced current Truckfighters vocalist Oskar Cedermalm) and drummer Sebastian Olsson, the band has unearthed all the best bones and nuggets from their previous efforts and distilled a sound that’s the perfect blend of mood, blues, and nut crushing rock and roll.

If you’re a fan of Dozer, it’s hard not to like Greenleaf; if you’re a fan of exceptional music in general, it’s impossible not to love Greenleaf. From opener, ‘Our Mother Ash’, it’s clear that all the characteristic ‘Holappa-isms‘ are present: that slightly trebly, fuzzed out bite of a guitar tone, those nimbly played blues flourishes, that ear for the almighty hook; that being said, superior chops are superior chops and we’ve come to expect this (yeah, we’re spoiled when musicians are not only great, but consistently great). So the real reward is hearing newcomers Jonsson and Olsson carve their niche in Greenleaf‘s legacy. Jonsson’s croon has a Frederik Norton (Dozer, ex-Greenleaf) edge to it with a splash of southern drawl; it’s a seamless transition, and after the first couple of minutes, it’s hard to imagine this latest incarnation of the band without him. Olsson, however, might out nudge him for the limelight as ‘Our Mother Ash’ sees him adopt a ‘Charged’ era Ruben Romano (Nebula) ‘catch your breath‘ cadence; it’s high tempo, high energy, and a damn near sprint out of the starting gate.

But this is just a smidgen of what Olsson brings to the table; just wait until the melodic prog shuffle of ‘Ocean Deep’ or the knee slapping romp of ‘Equators’ kicks in. The latter boasts some of the hardest hitting, shit hot drum fills of the entire album. Holappa and Backe synchronize a “call and response” blues lead riff that plays off of Olsson’s battery. The band as a whole is tip top tight and at about the 2:50 mark deliver a calculated bare bones doom strike that’s just a head banging blast.

Greenleaf is one of those rare bands that’s able to maintain a trademark sound while hashing out new, fresh ideas; each of their albums stands on its own with its own unique flavor. Whether it’s the moodier, brooding pound of 2012’s ‘Nest Of Vipers’ (due at least in part to Daniel Liden’s involvement; there are distinct similarities to Dozer’s ‘Beyond Colossal’ which he co-produced) or the straight up, stripped down highway rock of ‘Agents Of Ahriman’, each album sets the standard and delivers. However, ‘Trails & Passes’ is unique because it manages to extract all the best elements of their previous four albums and make something greater than the sum of its parts. Maturity and stellar songwriting are clear on the excellent ‘With Eyes Wide Open’; a similarity to their classic ‘Sleep Paralysis’ is obvious in the song’s quiet momentum and sparse opening arrangements; Holappa chimes in with some cool reverbed psyched out guitar effects as the song builds, but it’s Jonsson’s convincing delivery that seals the deal. As he repeats, “…open up your eyes, don’t trust their lies…“, the song erupts with a grand scale (emotional) impact reminiscent of Dozer’s ‘Big Sky Theory’; Greenleaf nails it here as the song shows every member in top form, and is crafted to highlight their talents in just the right way.

There’s something for everyone on this record, as ‘The Drum’ brings it home with an old school 70s ‘Stray Bullet Woman’ southern groove; but driving album finale ‘Trails & Passes’ sees the band in full alternative rock mode, with a sleek arpeggio lick that bridges to one hell of a chorus hook. The track’s melodic leanings show the band broadening its appeal and accessibility without losing its edge. Bottom line: Holappa and Co. once again deliver the goods.

Not much to criticize and everything to praise on this latest from Greenleaf. No doubt a breakthrough for the band, and an album this good won’t stay underground for long. Ladies and gentlemen, welcome to the best of 2014. Essential.