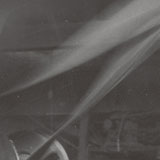 Headphones on, sit back and let me begin. Gog ‘Ironworks’ opening track ‘1870 – 1906’ is a gristled drone; it punctures the empty space between the speaker and my eye and seems to devour the air that lingers there. Here are elemental and rhythmic sounds, an ancient and longing sound that wants to be heard, it is then a ripple of the a bass line and piano which seems to rupture in the air in front of me. I am transported back to my surroundings just before I enter the next track ‘Tasks That Destroy Body And Soul’, here we are, in the midst of a savage and unruly beast, it calls out and tells us to listen. I am unaware of which sounds are musical and which are not, they burn between each and I am lost, but soon subside for the shortest of times just to give a glimmer of the human voice that lies amongst its wall of sound but quickly the wave engulfs us again.

‘God Says To Love You In Chains’ is a reverb drenched monolith, I ‘m reminded of early Swans in its brutality and I’m loving its unrelenting discord. As static and guitar sounds merge into a maelstrom, any thoughts of repent end as it slowly bleeds away into ‘A Promised Eternity Fulfilled In Cancer’ which is a new level of despair, underpinned with a piano this is far from a release from the previous tracks. It seems to twist and curl around me as I’m listening, the piano, the centre of this track is an anchor from the storm that surrounds me.

‘Into Her, She Carved The Word Empty’ is a falling chasm, void of any such thing as tone or sound. It is a scratch on the prism of music as it becomes a relenting nightmare into which I am present. Then a single chime pulses through this dirge, it is a calling of monstrous proportions, of an ungodly hammer strike, it soon falls into chaos and seems to devour any thoughts of restraint, and collapses back into itself in great folds of sound until it finally collapses and dies. Next ‘I Draw My Strength From You’ is a literal title as by this point I am succumbing to the great noise. A single chord like wire is puncturing the cacophony, its unturned chime pin pointing the rage around it, like screaming in the face of a storm, it is unclear what is sound and what is discord. We are pulled through a mire of sound, and seek a glory of filth. Finally placed back into reality, I have heard hell and it is Gog – ‘Ironworks’ is a true master piece of noise/sound recording.

A true portrait of steel and fire, this is a must for all you people seeking the true form of experimental music. This is a pure horror story of an album. It is brutal, dark and compelling. It is a must, for me and for you.