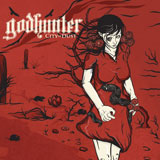 Godhunter are from Tucson, Arizona, yet the scorching sunshine of their home state seems to have left little trace on their dark, dense, sludgy outpourings. Their debut LP, ‘City Of Dust’ has an overpowering sense of groove. There’s the unmistakable sludge doom fingerprints over Weedeater or EyeHateGod in their DNA, but they lack the former’s zoned out weed influence or the latter’s nihilistic, drug addled hatred. What Godhunter do have in spades is riffs.

Riffs in metal are sometimes overused or underutilised. The key to a good riff is being memorable and heavy as fuck, generally. Opening salvo ‘Despite All’ is a good example of this, a solid scorched earth riff that rumbles along, steamrolling anything in its track. There’s almost a sense of desert rock about its structure. Add forty layers of fuzz and it could be a Kyuss riff. This is good, as it adds an identity to what could have become just another heavy doom/sludge outfit. There are also touches of Black Flag in there too, vocally. ‘Rats In The Walls’ is a slow burner, a rumbling menacing track that brings to mind Neurosis but with a bit more melody. The track sways and groans under the heaviness of the riffing. ‘Brushfires’ is another monstrous riff workout, in the style of Electric Wizard.

There’s an eclectic mix of prime sludge riffs with a hardcore edge and vocal delivery. I hate to call it ‘sludgecore’ but I guess that’s what it is. The influence of ‘My War’ era Black Flag is evident, but so is the nihilistic groove of sludge behemoths like EyeHateGod or 16. My favourite track has to be the sludge blues of ‘Snake Oil Dealer’. It has it all, the riffs, the cleaner intro, the tortured howl of vocalist Charlie Tousell. Before three minutes of it is over, the riff drops out into crashing waves of heavy. For a place so far away from the spiritual home of sludge, ‘Snake Oil Dealer’ has pure NOLA written all over it.

The album continues with such weight, it’s impossible not to be impressed. From the crushing and instantly catchy ‘Palace Of Thorn’ to the closing monolith ‘Plague Widow’, the album displays a startling maturity. ‘Shooting Down The Sun’ could be the darkest country song ever written, and even though it appears very different from the tracks around it, it fits seamlessly in with the overall feel of the record. There’s a haunting nakedness to it, a stripping bare of a band that up to this point has been caked in muddy riffs. But then the vulnerability is gone, swallowed back within gang vocals and tar thick riffs. But it was there, like a ray of light through the black, itching for the moment when it can be released again. My instinct suggests that they should embrace that.

‘City Of Dust’ is a record by a band coming into their own. It possesses a much more assured sense of identity than their ‘Wolves’ EP, while retaining that release’s sense of groove. Godhunter could become something very special one day, and this is only the beginning. 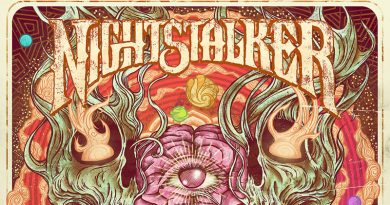