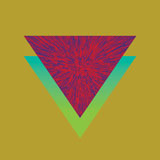 In most senses of the word, Goat are no longer a band – they are a phenomenon. The anonymous collective made a name for themselves with tales of Swedish voodoo origins, a diverse sound that absorbed Fela Kuti, Hawkwind and Curtis Mayfield, amongst many others, and a reputation for electric live shows that ramped up the intensity of their debut with a fevered, ecstatic physicality that actively enveloped and mirrored the audience’s experience, rather than delivering the mere spectacle that the critics expected. Two years on, Commune shows that while they have learned to temper their extremity, carefully ramping up the tension and finding new techniques and textures with which to embellish their ritualistic jams, they still remain a fantastically exciting listen.

On the strength of material like Talk To God, Gathering Of Ancient Tribes and the rip-roaring, Bullitt-esque funk of Goatslaves, they haven’t lost their vigour entirely. The direct, expressive solos and yelps, whoops and cries of “Into the fire!” gives Gathering Of Ancient Tribes a laserlike focus that transcends its essentially jam session roots, slight flushes of drone pulling in the headily ritualistic vibes essential to any psych album worth its salt, while Goatslaves’ tense percussion and slick basswork deliver the requisite physicality, a slight reminder of World Music’s core strength. It’s the realm between these avenues, between body and spirit, that orients Goat, and while their debut most certainly leaned towards the former, Commune seeks more deliberately to find a state of equipoise.

Consequently, there is a greater emphasis on slow burners that focus more strongly on their 70s pop and rock predilections, The Light Within blessed with a twinkling, rise-and-fall melody and delirious lead break (though the shrill ululations and groove-heavy bass certainly isn’t far behind), and the darkly mesmeric instrumental track To Travel The Path Unknown writhes and contorts, on one hand completely blissed out and, on the other, oddly foreboding. It sounds like the movie God Told Me Too looks, a white-out colour haze of hippy idealism gone to the dogs. The fact that it’s followed by Goatchild and one of the few inclusions of male vocals in the band’s history, a grim baritone that’s part Nick Cave and part Jim Jones, seems to redouble the effect.

Despite the difference in shade and an increased proficiency, not only in pace and songwriting, but also with their obviously impressive musical skill and ever-increasing range of bells, whistles and synths, Commune feels like a natural progression from World Music. The elements are firmly set in place, and the band themselves have confirmed that there was no intention of straying too far from their admittedly loose template. It’s a vivid exploration of wah-drenched guitars and Afro-Caribbean percussion, of Amon Düül’s progressive visions and Blaxploitation groove. One minute they’re crossing the Atlas mountains, the next they’re in a San Francisco apartment, bongos nestled firmly between knees and, with that in mind, they’re probably not going to gain many new converts.

All the trappings are still there – the almost unbelievable origin story, the whiff of theatre to it all and, most damningly, the accusation that it’s all been done, and heard, before, on a thousand-and-one world psych compilations from across almost half a century. To focus on this, though, is to miss the point entirely. Commune is still a wholly immersive experience, exciting and vivacious, and it reflects an ideal that music is a true force of nature, a cosmic element capable of great good and transcending time and nation. The question of cultural appropriation can be considered null and void when Goat draw from such a vast tableau of sound, and with this degree of conviction, and the second these songs make it out into the wild, when crowds and performers dance and cavort together, it’s likely that even the harshest of critics will realise that these Swedes are the real deal.