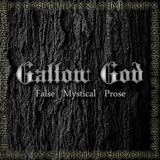 Sometimes these days you pick up a rock magazine and it’s like reading a different language; post-this, that-core and I’m not trying to come off sounding like some old fart here, I’m only eighteen years older than the age of the average Slipknot fan for fucks sake and I’m looking forward to having a midlife crisis and buying a motorbike in about a decade. However I am old enough to sometimes miss the days when metal was metal and you didn’t have to sit with the headphones on and a pen and paper and work out what they hell is going on.

Fortunately Gallow Gods exist. Signed to the rising roster of cool that is Austria’s pscyheDOOMelic records ‘False Mystic Prose’ comes off like the original Black Sabbath never left us or took a serious diversion from the path of their first six albums… I mean I wasn’t a glint in the milkman or anyone’s eye when Technical Ecstasy was release but I remember how gutted I was when I came to listen to it having grown up on Masters Of Reality, Vol 4 and Paranoid.

Fortunately Gallow Gods are all about continuing the finest traditions of doom ridden metal as laid down by the true forefathers. ‘False Mystic Prose’ draws its singular influence from the UK Doom scene and the myriad of great bands that have gone before. This could either be fantastic or derivative… fortunately they rise to the occasion and this is an album tinged with melody, slow considered passages and huge doomy riffs like slabs of concrete falling in a steel factory.

Clocking in around 40 minutes the four tracks here are epic and bold; from the mournful vocals on ‘The Sin & Doom of Godless Men’ to the gentle piano that heralds ‘Ship of Nails’. This is an album cloaked in darkness, slow as a sloth on Mogadon and yet a thing of beauty at the same time. Vocalist/Guitarist Daniel Tibbals comes off like a young and tuneful Ozzy as walls of doom, that the master Iommi would be proud of, ring out. The album is not as inward looking as this review might imply though, there is a tinge of the forward lookingness that is contained in bands like Cathedral, Anathema (of old) and even pioneers Trouble as the ‘Gods mix in folk-esque passages, death/doom and the aforementioned piano.

As a band they are extremely tight and the songs are well crafted – a point emphasised by the complimentary production which doesn’t bury the band under a wall of down tuned sludge but rather is warm and clear allowing each chord to ring out, rather than sound like it was recorded at the bottom of the bath.

With ‘False Mystic Prose’ Gallow God haven’t reinvented the wheel, but they have certainly found a cool retro looking set, polished them up and are now cruising around oozing with style.