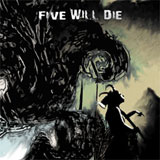 There are few more commanding ways to start an album than by screaming “BOW DOWN!” in the way that Five Will Die guitarist Daniel Howard does on Worth and Soul‘s opening track “Wrecks of Men”. But when ‘singer’ Andrew Forrestal takes over with his rumbling, vomit-crusted roar, it becomes clear that we’ve not yet scratched the surface of the ceremonial death-march that is Worth and Soul.

First things first, it must be said that we’ve been a bit slow on the uptake with this one. Cork’s Five Will Die have been around since 2005/2006 but this, their second album, has slipped through our fingers for two months since the release date which has been partly down to ignorance and partly to sheer laziness, so apologies. Having recently witnessed one of the band’s live shows it was immediately obvious that Five Will Die had a clear musical vision – namely of grinding you down with oppressive, gloomy riffs and then to freak you out – but how well that would translate onto record was yet to be seen.

After scooping around the internet for more information on the band, the consensus seemed to be that they were more of a ‘live’ band and that their previous releases had somehow failed to capture the essence of their live sound. But here Five Will Die seem to have succeeded, balancing their instrumental punch and the brutal vocal interplay between Howard and Forrestal to tremendous effect.

But the thing that sets Five Will Die apart from many of their peers, both live and on record, is the way that their sludgey, mid-tempo onslaught gives way to moments of quiet introspection (“Wrecks of Men”, “Sons of Horus”, Blame the Martyr”). Indeed, the melodies in their songs are also pleasantly hard to second-guess, developing and progressing in unusual ways to create paranoid, intoxicating atmospheres. This is reflected in the philosophical nature of the lyrics (thankfully the album contains a lyric sheet, otherwise I’d have been pretty lost trying to decipher words from Forrestal’s chainsaw-delivery). Any talk of ‘demons’ in the lyrics are purely of the ‘inner’ kind and the songs are all the better for being devoid of metal clichés.

If there was a criticism to be lumped at the album it would be that the track-listing groups the songs together in great blocks; even though there are great riffs in every song, when you’re confronted with a voice like Forrestal’s you tend to blank everything else out. Saying that, “Blood and Soil” does a good job of breaking the album up by being shorter and faster than the other songs and the spoken-word section in “Great Minds and Fools” is a welcome addition but the album can be hard to sit-through in one sitting, especially if you’re already on a downer.

However it’s ultimately a testament to their single-minded bludgeoning-instinct that the onslaught is never-ending. Five Will Die’s live sound has been well-translated on Worth and Soul so now the experience can stay with you long after the tinnitus has worn off. Now, bow down.