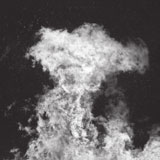 Familiars apparently recorded these two tracks on a farm in Ontario, though it wouldn’t be in any way hard to imagine them having been recorded in a shack in the desert in California given their take on stoned, blissed out riff rock.

Taking a similarly driving approach to earlier QOTSA or Black Mountain, they pull off the trick of being simultaneously upbeat in temp and downbeat in mood pretty well. It’s a blend of fuzzy and insistent riffing topped with low reverb drenched vocals that sound more akin to something you’d find on an old shoegaze record.

Let’s get the elephant out of the room first though: those vocals are the weak link here. While the melodies are fine the actual performance is a little too timid and mumbly to truly compliment the music; it needs something a little more confident to really push things that extra mile. The reverb effect is cool and the low register isn’t a bad idea, reminiscent a little of the style adopted by True Widow perhaps – but there’s simply no expression or spark in the singer’s delivery that could really bring the songs to life.

First song Fire In The Sky in particular is robbed of some momentum by a vocal that sounds distant and uninterested. Though perhaps that was the intention, who knows? Otherwise the track is fine, a mid-paced catchy little rocker with some nice fuzzy guitar interplay. Second song Beyond Its Reach is the more exciting of the two. A more driving number that gets into some nice, grungy sections of simple heads down riffing in the middle and end. The aforementioned vocals pick up a little here too, and actually add a little atmosphere to the slower section towards the end. Both tracks seem like they’d make a fine soundtrack for driving around the middle of nowhere after dark, with their sleepy eyed drift having a real late night feel.

I’d like to hear these guys let loose a little more, as they’re perhaps a little too polite on this recording to really get the blood pumping. They need to get their hands a little dirtier, kick up a little more dust, and let those vocals get a little more animated. They don’t need to construct riffs the size of the Grand Canyon to attract attention, or indulge in massive volume – their hazy, laid back style is fine, but just isn’t quite as relaxed as it needs to be. Yet. This isn’t a bad start mind.