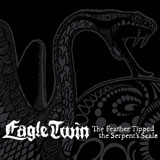 As far as religious texts go, the Old Testament is pretty fucking badass. Regardless of your religious standing it’s hard to deny that the book is filled with all kinds of biblical badassery – fire and brimstone, and pestilence, smiting and various other forms of debauchery and violence. The God of the Old Testament was vengeful, his hand swift to come down on those who would stand against his will, and it’s this sense of omniscience that Eagle Twin seem to be able to tap into in their epic story-telling. Their first album, The Unkindness of Crows, documented a murder of crows and their battle against the sun and The Feather Tipped the Serpent’s Scale picks up where that story left off – with the crows burned back down to earth as black snakes. Metal has always flirted with the dark side – occult and satanic imagery interspersed with dragons and dark wizards, but there is no character that more distinctly represents the fall of mankind like the legendary serpent. And this is where the album really takes shape – around the biblical and literary mythology and symbolism of the serpent, the original deceiver.

This is all without even a mention of Eagle Twin’s monumental sound. Anyone who heard their last album will know that these guys make an incredibly dense progressive-sludge noise for a two piece and …the Serpent’s Scale might even top The Unkindness of Crows in terms of all-encompassing tone and atmosphere. Take for example the truly impressive opening tracks “Ballad of Job Cain” Parts I and II” – one long 18-plus-minute jam split into two distinct halves. The song is a complex web of angular riffs which are embedded in a fundamentally driving groove which carries across both tracks, broken up my moments of calm, drum solos but tied together by singer Gentry Densley’s deep, throat-chanting which tells of the crows’ transition into serpents. As well as the malevolent atmosphere that oozes from both tracks there is also a strong thematic thread running through them as well. There are all kinds of allusions in the song – the title itself is certainly a reference to the 1971 “electric” western Zachariah, but more appropriately it foreshadows later references to the story of Cain and Abel.

The story in which Cain kills his brother Abel, essentially becoming the first man to commit murder, is steeped in discussion and controversy. Interestingly, some Jewish traditions claim that Cain was in-fact fathered by the Serpent from the Garden of Eden, explaining his inherent evilness. This link is strengthened on “Adan (Lorca)”, which is itself a reference to the Yemen city where the brothers are reputedly buried. A lumbering riff twists and turns ominously, before seguing into the devastating “Snake Hymn” in which low-end riffs unfurl to reveal yet more riffs amid pounding, tempestuous drumming from Tyler Smith while Gentry asserts that “Nothing else has ever happened/ Paradise was always made from snakes” – an alternate telling of the creation story. “Horn Snake Horn”, while one of the shortest tracks on the album, really encapsulates Eagle Twin’s unique hybrid of sludge, doom and progressive rock elements – they create an overarching sense of dread with deep, menacing chords, then add a layer of reckless sludge swagger with restless wiry guitar and tumultuous drumming stirring under the surface.

Final track “Epilogue: Crow’s Theology” may be the most masterful slice of doom on the album, led primarily by Gentry’s extremely downtuned guitar and voice. Throughout the album Gentry remains omnipresent, like some timeless shaman espousing prophecies, his words given even more gravitas by his rumbling voice which drips with an ancient, evil feel, permeating each song. Sometimes Gentry speaks from the perspective of the snakes and the crows and at other times he becomes an ambiguous narrator, never truly revealing which side he is on but seemingly revelling in the chaos that is unfolding in the biblical drama of the songs.

The phrase “concept album” has become something of a dirty term in the last couple of decades, nowadays more often associated with bands trying to lump together a bunch of disparate musical and lyrical ideas under the guise of being “conceptual artists.” The results are more often than not overblown, irrelevant and unappealing tat. Once again Eagle Twin have proved an exception to the rule, creating what is essentially a concept album that actually hangs together thematically and atmospherically, weaving a variety of sources of inspiration into a cohesive whole. Some of the tracks on the album are actually single pieces of music divided into sections (“Ballad of Job Cain Pt I & II”, “Horn Snake Horn” and “It Came to Pass the Snakes Became Mighty Antlers”) while others are joined together by atmospheric feedback which all adds to the idea of this being a single-piece of music. But even when there are pauses and stops in the action it never takes away from the unifying sound and vision of the album. If The Unkindness of Crows signalled Eagle Twin’s arrival on the doom scene, The Feather Tipped the Serpent’s Scale should be a clear indication that they’re masters of their craft, and they’re here to stay.