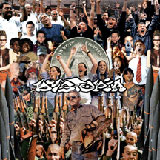 Punk’s not dead, it merely crawled into a disused orifice of the dark underbelly of the capitalist economic system and started to multiply in the warm moist conditions there. In 1991 cult California band Dystopia emerged screaming from the said orifice in a tantrum of down tuned righteousness, leaving an inspired trail of seven inch singles and split albums. And this is where that trail ends.

This is a savage and fucking pissed off recording that effectively typifies Dystopia’s precocious and brutal hardcore dynamics. This particular disc is referred to as the final Dystopia LP, the tracks were recorded between 2004-2005 and represent “the last chapter in Dystopia’s existence writing bleak and heavy doom-ridden punk” (that’s what it says on their fittingly sparse and enigmatic myspace page).

Released earlier this year, this recording uses the eerily effective technique of whining feedback and disjointed spoken word samples, employed in the past to such chilling effect by various reprobates such as the Butthole Surfers and Eyehategod. This is coupled with the meaty multi-tempo hardcore thrash that personifies Dystopia’s hardcore-sludge hybrid, the twin screams of drummer Dino and guitarist Mauz injecting ferocious punk attitude into the already toxic broth.

‘Now and Forever’ starts like a nightmare, a multi-layered sample of a disembodied voice pessimistically commenting on global politics drones on whilst feedback and slow doom-charged bass encroach on the listener like a giant bloated cockroach. Three minutes in and Dystopia take off, charging against this insane world and sounding like the crustiest and most despairing punk band in the western world. There is a beautifully old school feel to Dystopia’s thick and rancorous sound, I could almost be standing in the Mermaid pub in Birmingham circa 1986, watching them shower the amassed anarchists with bile and cheap cider.

‘The Growing Minority’ is a short sound-collage based around a sample of a woman yelling about the horrors of enforced electro-shock therapy, then blasts into ‘Illusion of Love’, which thrills me to the marrow with dark and desperate energy. All seven tracks are a raw treat for any lover of old fashioned crust punk metal hardcore (the eighth track on my CD is twenty minutes of complete silence). The real clincher for these old ears is that over the course of the album Dystopia come very close to approximating the pained sound and attitude of the incomparable genius that is Rudimentary Peni. The scorched vocals of both Dino and Mauz recall the magnetic despair of singer Nick Blinco and his black world of psychological torture. What greater recommendation could there be?

Dystopia truly reflect the concept they are named after. Excuse me while I reach for my anti-depressants.