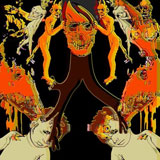 Originality alert – there is more than a hint of sloppy and mischievous genius at work here. Manchester’s DKIH spew out three weighty tracks of festering arse-end filth on this, their demo offering. After giving it a few listens, I would definitely recommend this positively schizophrenic outing. Not a bad production either – the guitar tone is heavy and oppressive, and the bass, drums and vocals are all clear and nasty. First rotten number, ‘Yorkshire’s Favourite Son’, is a harrowing twelve minute trawl through somebody’s personal hell.

‘Simon Weston’ (his face should have graced the cover really) is a ‘snappier’ rock number with some real mad singing on it – it sounds like classic NWOBHM played by the doped inmates of a psychiatric institution. Last track, ‘In(n)it For The Chips’, is another twelve minute plus slab of crazed rock meets pseudo-sludge meets mental illness. About five minutes in, DKIH seem to become another band. The cyclical lurching riff is impossibly retarded and heavy, and the singer really sings again. In fact he sings his little black heart out. He is amazing – his range encompasses all my favourite styles – he just does what takes his fancy. I like this bloody weird demo – it has a real skewed charm that results from, I suspect, a playful and warped amalgamation of cruel stoner brains and dysfunctional lives.

Plus Dog Kicked In Half easily wins best band name of the year award. 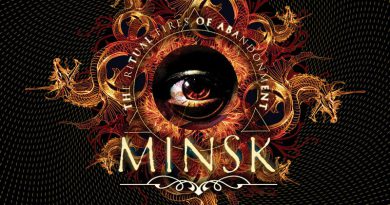