Initial impressions just looking at this album, with a name like DoctoR DooM and the shadowy figures on the cover, you might think you’re in for some sort of titanic, occult doom style nonsense…and the first minute and a half when you stick this on might even inflame the preconception…but this album is proof that you shouldn’t judge a book by the cover.

DoctoR DooM hail from the Midi-Pyrenees region of France. For those of you lacking in knowledge of European geography, that’s right down the bottom of the country, not a million miles from Spain. That means it is a bloody long way from Scandinavia but first impressions on listening to this release are that this could have come from the land of ice and snow as it certainly does share many genetic traits with bands such as Witchcraft, Graveyard, Vidunder, Brutus…etc. DoctoR DooM occupy the cleaner, bluesier end of the spectrum as opposed to the heavier, Sabbathier side of things. Opening track The Sun offers up a very strong impression of Peter Green era Fleetwood Mac jamming with early Jethro Tull and once they have set out their stall early on, they continue to build on the theme to the very last note.

It is clear that these guys are a very talented group of musicians. The quality of the playing and composition is consistently high throughout. Each song features great riffs and dynamics remaining succinct and fat free. DoctoR DooM have entirely bought into the sound of the late 60s and early 70’s. This is clearly rooted more in jazz and blues rock territory than traditional heavy rock. In fact one of the noticeable differences here is the guitar sound. For the most part DoctoR DooM favour clean tones as opposed to the big, balls out sound of a Les Paul cranked through a Marshall. It’s an unusual move for a band rooted in the heavy rock world, but it does kind of work for them as the overall production benefits from that warm, vintage vibe that compliments the era they seem keen to pay homage to. This is also, however, where music comes completely down to taste. While I can appreciate what DoctoR DooM are doing and I’m very impressed by the skill they show in their playing and writing…basically, I love big fat, kick arse rock guitar tones. So, while I can dig these guys, by the mid point of this album, I do find myself crying out for the band to plug into a filthy Marshall stack, turn it the fuck up and rock the fuck out.

Minor niggles aside this is certainly a strong album, one which, for my money, does have the edge over their Scandinavian counterparts in terms of nailing the retro sound and vibe by marrying it to a stronger sense of dynamic and song writing suss than a lot of similar bands seem to achieve. With the current popularity of this particular branch of the rock and roll tree, this album should do brisk business. Time for these guys to get in the van and head north!!! 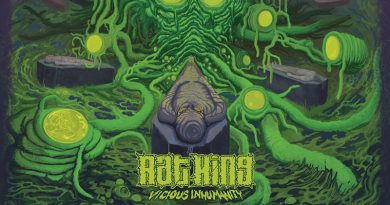