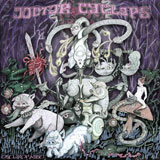 Doctor Cyclops are another addition to the retro doom movement, one that counts such excellent bands as Blood Ceremony, Uncle Acid and The Deadbeats and Graveyard amongst their number. Their new record, ‘Oscuropasso’ channels all these bands and adds liberally doses of Cathedral-esque eccentric doom flourishes to create something that’s pretty damn good. I’d never heard them, but have read good things about their first album. I’m disappointed I haven’t put the effort in until now to hear them, as this may be the first ‘must hear’ record of 2014.

Opening track ‘Waterfalls’ channels pure Uncle Acid with some fantastic bluesy soloing and soulful vocals. It possesses the thunderous slow motion heft of classic British doom, and adds some great blues riffs that work well with the overall feel. ‘The Monk’ follows with some surreal lounge-jazz esque blues that eventually segues into some more thick doom riffs. This is one of the finer pieces of proto doom I’ve heard all year, ticking all the right boxes without falling into self-parody. By focusing on the blues part of the Sabbath sound, it adds groove and melody to riffing power. ‘The Monk’ also possesses the one thing missing in many of the occult doom movement; the transcendent power of rock and roll. It’s catchy, and you find your head nodding in appreciation before long.

‘Angel Saviour In The Cannibal House’ is a rocking doom anthem, and you can see why they picked this track to make a video for. It’s a rollicking good ride, with some great atmospheric keyboards enhancing the occult sound. ‘Cobweb Hands’ is another hard rocking track, and vocalist Christian Draghi is top notch here; conducting his voice with menace and gothic overtones. He comes across as a manic priest from some Hammer Horror movie. He’s a storyteller in the vein of King Diamond, but with less Satan and ball bursting screams. But the album’s highlight is the 16 minute manifestation of nights watching Italian horror movies and listening to Sabbath, ‘Rotten Trolls’. It blends everything the rest of the album has done well; bluesy riffs, occult rock and old fashioned doom, and stretches out to epic proportions. The trick with these epic doom workouts is keep them varied enough to keep the listener engaged, yet not so much that it feels disjointed. Doctor Cyclops succeeds here with aplomb.

This is a record that takes its cues from early Sabbath or Trouble; ensuring that the melodic guitar lines aren’t too suffocated by fuzzy distortion. Doctor Cyclops are the bastard son of Cathedral and Uncle Acid, and they are just as awesome as that sounds.