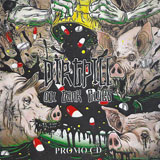 Dirtpill? Who? I am pretty sure the name of this band barely would ring a bell for the most part of the readership. So let me introduce you to these young fellas who claim to sound “just like Amebix raped by Throbbing Gristle on the South Pole”. The trio – JSB, Jugr and Andy – comes from Krasnoyarsk, Siberia that’s why the Antarctic reference makes sense – they must be used to extremely low temperatures which somehow reflects in the band’s sound.

Starting out as early as spring of 2008, Dirtpill has put out a bunch of self-released and downloadable records to the date, including one demo recording, one extended play and one split record with the pals of theirs from two different former USSR countries. Despite overall positive response to the material, they don’t seem to get much recognition even in the thriving Russian “sludge” scene, not to mention worldwide attention (because there’s nothing to mention at all).

The year 2011 sees the band’s first full-length album entitled “Oil Tank Blues” containing 13 tracks of violent lo-fi insanity and then the bassist/vocalist departure which puts Dirtpill on hiatus. But JSB only left Krasnoyarsk, not the band, moving to Saint-Petersburg. Guys are trying their best to find a label to release the album sending promos here and there and were kind enough to send me a copy.

The first thing you notice when you start playing the album is the production, which is fucking raw and sick. That drum kicks are literally shoving the finger into your brain (which reminds me of the drums production on the Toadliquor’s records), crushing basstones fart loud and low, guitars are dry and harsh but then all of a sudden they break with the bluesey passage that makes your head nod in tact. Mad screams drowned in mix and a shitload of sound samples add to the overall bleak and sickening atmosphere. Tempo-wise they’re keeping things on the more hardcore side of palette, barely slowing down from the insane fast banging. Also take a look at the tracks duration – there’s not a single song longer than 4 minutes (the longest one is the cover version of the Russian surf band Messer Chups and lasts for 3:38). Brevity is the sister of talent, people say. Discussable but I am not going to argue this time.

Everytime I try to describe Dirtpill’s music I end up with an image of frozen hell of Finnish sludge/hardcore à la Loinen and the stinky swamp of the Mugwart’s bluesey groovieness. Can’t help comparing them, but the truth is Dirtpill doesn’t sound like the aforementioned bands. That is why I keep on insisting they’re one of the best bands in genre from around here: they’re not trying to impersonate any bigger and well-known bands, they’re not just mixing cliché like the most part of the newish “sludge” bands seem to do. Basement sludgepunk is the way to be. Prepare your ears for the half an hour of heavy-ass chugging grooves oozing with the sharp feedback noise!