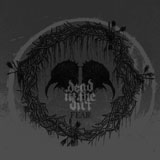 I’d just about reached the point of total D-beat crust-filth saturation from Southern Lord, following the veritable slew of releases in that vein of late, so it was with a heavy heart that I approached this 7” by Atlantan trio Dead In The Dirt, expecting yet more crusty Entombed-worship and bum-tit-bum-tit drumming…boy was I wrong!

Hell’s donkeys, this is FIERCE!

Unrelenting, berserk and full-on, Dead In The Dirt take the ‘Swedish-Death-Metal-meets-D-Beat-Crustcore’ thing and push it into RABID territory. Everything is amped-up to the max and the energy levels go through the ROOF. Ripping and tearing their way through ten songs in a little over ten minutes, Fear is the summation of the unholy union between the pitch-black ominous crust of His Hero Is Gone, the furious urgency and energy of Cursed and the velocity of Drop Dead, blanketed in the accumulated filth of those chainsawing guitars of Swedish mass destruction, a sound which puts them squarely in the same ballpark as Trap Them, although these boys ply their trade in an infinitely more unhinged fashion.

From opening salvo ‘The Screaming Wind’, through to final track ‘Fear’, Dead In The Dirt do NOT let up or give you a chance to breathe – it’s just one brutal smashdown after another. Vocals are a trade-off between painful frenzied shrieking and throatily guttural growls, both of which are – like everything else on Fear – firmly in the red, and those filth-encrusted guitars range between massive chugging riffage, full-speed hardcore blurs and occasional angular dischords.

Dead in The Dirt blaze through your ears, wreck the joint, annihilate any small animals on the premises and then BOOM, they’re outta there ten minutes later leaving you to clean up the mess and make sense of your melted face and busted ears. I’d say that’s pretty damn hardcore.