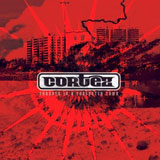 Ever since “Blues For the Red Sun” came riding out of the Californian desert in a dusty Cadillac in 1992 it seems a million bands have dusted off their fuzz boxes, fired up a big assed bowl of weed and jumped on the stoner bandwagon. If you throw a stone nowadays it seems you’ll hit a band drawing their influence from the heady aroma of Kyuss and Fu Manchu and nailing down the big riffs and fat grooves and it leaves me wondering if the whole scene is becoming over saturated. I’ve certainly gone from seeking out the latest releases and checking them out religiously to adopting a ho-hum kind of attitude when presented with yet another band claiming their desert heritage…regardless whether they’re from Sweden or Nevada. Sure, many of these bands do sound great but very few have that extra something that sets them apart and makes you want to listen further.

So, on to Cortez, do they have that something extra? In so many ways this Boston band tick all the usual stoner boxes…the riff are suitably fat, the bass rumbles, they kick back into some lovely grooves and know when to push the pedal down into a fearsome rock out but where most stoner bands seem to fall down Cortez do manage to throw a few extra jalapenos on the nachos!!! First up, these guys know that deep down, under all the fuzz music essentially comes down to one thing…the songs and these guys write some very cool songs!!! Yep, don’t be afraid to say it, they write songs!!!! This isn’t just a collection of southern fried riffs packaged together as a soundtrack for a stoner ride down route 666, these guys know how to catch your ear and blow some smoky melodies right into your synapses. “Stone The Bastards” in particular is a killer call to arms and easily the fist in the face stand out of these six tracks.

Another ace in the hole here are the vocals of Curtis Caswell. This guy has a cool set of pies on him that bring to mind Dan Soren of the late lamented Sixty Watt Shamen. He knows when to hold back and when to rage and instills the whole things with a soulful bluesy vibe that lifts this release above the average and takes it back to a more retro 70’s kind of vibe. At the end of the day, when a band states in their biography that “someday they hope to tour with ZZ Top. Or at least play at a bar that has ZZ Top on the jukebox” you know that their heads are in the right place and for that reason alone they have a head start on the competition, their bones may be in Boston but their heads are in Mississippi!!!