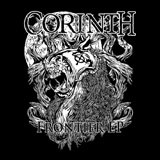 Sludge Metal. You all know the deal. The Melvins laid it down, Acid Bath oiled it up, Bongzilla and Electric Wizard drugged it, Crowbar, EyeHateGod and Buzzov*en stoked its furnaces, Godflesh, Mistress and Scorn re-programmed it, Cavity smashed it, Raging Speedhorn and Iron Monkey beat it up and then Mastodon came along and catapulted it into the entire universe’s minds as pretty much the most beautifully fucked-up music of all time… all whilst somehow making it more accessible to everyone. These days the genre itself is thankfully far more diverse as a consequence of the actions taken by pretty much every citizen of Atlanta Georgia back in the mid 00’s and it’s only now that we’re beginning to see a New Breed of British Sludge emerging from the eternal Europe vs US ping-pong contests that are heavy music trends.

Kicking out chunky slow n’ low jams since mid 2013, Corinth have already been making some waves this side of the Atlantic in the general direction of the Filthy Swamps of Doom. Their opening 2013 Demo was a good taster of the meaty surprises lurking deep in these Yorkshire puddings, but as the gravy continues to spill forth in the form of the first EP proper Frontier, it’s clear these Notherners mean seriously riff-laden business. There’s proven pedigree in the band in the form of Ben Corkhill (BongCauldron, Oakenshield) on guitars/vocals and Vanessa Murray (ex-Severed Heaven) on guitar alongside Tom Clayton (bass/vocals) and Andy Baron (drums) and it doesn’t take long for the fourpiece to once again bow down to the great Lord Chug of Chuggington in a most noble, head-nodding fashion.

Despite agonisingly carbon-copying The Sword’s Celestial Crown on the intro of the opening title track, the die is certainly cast solidly as the guitars interweave and mingle together like stuffy grads at a PWC open day. Its fuzz Jim, almost exactly as we all know and love it from the early Elder or Saviours frame of reference, but there’s a swaying galleon feel to Frontier that gives it an easily repeatable quality that’s sure to torment you as to why it sounds so damn cool. Back-up number House Of The Gods features some gruff, rasping Phil Mitchell vocals alongside the continuing groove of Baron’s drums and the dual-action, swaggering riffage of Corky and Vanessa. There’s also some tasty guitar harmonics which sit well in the mix and hint at a tinge of black metal magic within this otherwise smouldering cauldron of heavy rock soup.

Yes, you could say that this strays a little too close to what Lord Dying or Black Tusk have already begun to build as “sludge MK. VIII” or whatever version we’re at now, but nonetheless with their uncompromising style, plenty of slicked-back, adeptly-tailored groove and their deft hooking of all the right influential parties together, I’m confident that Corinth should be putting a buzz in your oven in no time at all. Cross the Frontier or choke on the algae that’s sprayed into your face as Corinth gallop on by in search of soggy, boggy pastures new.