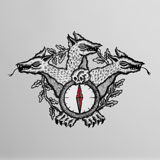 Belfast’s Comply Or Die unfortunately announced their decision to split shortly before they released Northless, their sixth release in as many years since they formed in 2006. Well-respected in their native Ireland, they will perhaps be most familiar to the rest of us for having released a split with fellow Irish wavemakers Slomatics back in 2011. It’s a shame that Northless will be the last thing we hear from them because it’s a pretty fantastic album.

It wasn’t always smooth sailing for Comply Or Die though, and the recording of their final release was marred with difficulties – eighteen months of “treading water” according to the band. However this tension can be felt all over Northless‘ eight tracks and it works very much in their favour. Combining wiry post-hardcore dynamics, straight-up punk rage, and sludge and doom’s filthy underbelly, Comply Or Die serve up a lovely racket in the vein of Neurosis, Fugazi, Unsane, and Eyehategod.

The album is well paced, pitching moody, longer tracks like the blustery opener Meridian and album centrepiece Iron Mountain against the likes of Cultus and the brilliant, manic closer Dagon which combines hardcore with squalling Matt Pike-ean riffage. Bishop swaggers and rages, the vocalist channelling his inner Mike IX before the song veers off into a psychedelic solo, while Argonaut is a full-on post-hardcore anthem, replete with a – dare-I-say – repeatable, major-key chorus. If I was clutching at straws, I could point to Architechture Of War and Agon as feeling slightly overlong in the overall context of the album, both tracks starting to lag towards the end. But this is a minor quibble in an otherwise cohesive and highly enjoyable album.

I suspect that it may a case of Big Yellow Taxi syndrome – “You don’t know what you’ve got till it’s gone” – but Comply Or Die have gone out on a high. Too often it seems to be the case that we leave it until a band announces that they’re splitting up before taking the time to investigate their back catalogue. As far as posthumous albums go, Northless is a blinder, and fortunately for the rest of us, Comply Or Die have five more releases for us to go back and re-investigate. Time to get digging.