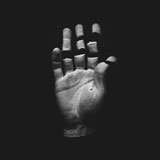 The artist name CHVE stands for Colin H. Van Eeckhout. For the lovers of the complex and heavy, this name is immediately triggering the name of Amenra. The record is out on Consouling Sounds and has one song on it, Rasa, that lasts half an hour. That is one amazing half hour though.

Though released under a different name, the release fits in with the general output of the Church Of Ra. The sonic difference is huge, but allows for more subtlety and a different artistic output. Van Eeckhout is creating something much more subtle and less emotive, but much more ethereal.

That’s a lot of words for music that feels very minimal, finding a common ground between Arvo Pärt and Sunn O))) in a setting that evokes images of primitive surroundings, forests and lush, tranquil green surroundings. In the middle of a silent setting, in harmony with its surroundings the music starts and tells a warm, droning story.

A continuous, never ceasing drone is the basis of the soundscape that is spun out. Chanted vocals are heard under the cover of a blanket of that sonic drone, wordlessly evoking primordial sentiments and wordless visions of something out of time and space. Van Eeckhout treats the drone as a folk instrument, gently meandering and wailing as if it conveys an ancient ritual.

After almost half of the track, the drums enter with a tribal rhythm, regardless of the other flowing sounds that are already filling the void. They swell and become more intense, fuller and threaten to overwhelm the soundscape itself. Reminiscent of Wardruna, the vocals are on full strength here, but drowning in the onslaught of sound.

The assault moves to a point of culmination and then starts winding down. This it does very slowly, gently stripping the sound down to the bare minimum of the drone that switches its intonation carefully. The vocals ebb away in a similar way, but are in the end all that remains and then ends as merely an echo.