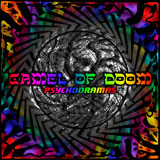 Stop. I know what you’re thinking and you’re making a terrible mistake.

You’re thinking that a band named Camel Of Doom can’t possibly be any good, right?

Odd name aside, what we have here is the latest epic recording from the mind, fingers and talent of ex-Esoteric man Kris Clayton….and not, as you may possibly be mistaken, Llamasoft mainman Jeff Minter, which would be an easy mistake to make.

Now, with Clayton’s background in drugged-out space-sludgonauts Esoteric you can be fairly sure of what to expect and Psychodramas: Breaking The Knots Of Twisted Synapse does not disappoint, bringing the cosmic doom psych in spades. Not to mention the fact that not only does the digital form of this hour long trip into inner and outer space come with ANOTHER hour’s worth of bonus track, bringing the overall track total up to 17 (!!!), but it’s also a concept album. That’s right, you heard me: a concept album, and one based around, to use the maestro’s own words, “…telling of how the artist used arcane techniques to rebuild a mind shattered by constant self abuse, drawing on the darkest aspects of the psyche to force his mind in submission to his own will.”

Phasing in from Universe B, the cosmic sounds and ominous chimes and drones of the short and not-so-sweet ‘To Purify The Air’ break the silence and usher in first track proper ‘The Anger Of Anguish’. Initially invoking the more strident, Mellotron-driven, moments of King Crimson track ‘In The Court Of The Crimson King’ things swiftly take a turn toward the more forcefully heavy end of the spectrum with a lurching Godflesh-meets-Melvins riff, subtly pummelling drum machine and echoing throatily aggressive vocals, all the while lightly embroidered with atmospheric wooshes and swirling electronics.

As we move through the track a tinge of Sabbath enters the riffing, bringing with it an eerie vocodered voice, and, as things slow down, shades of Neurosis begin to make themselves known to boot.

‘From The Sixth Tower’ brings the aggression up a notch during its opening segue, also shot through with those wooshing spacious touches that add depth to the overall sound of things. The track begins to slow down and the overt aggression turns inwards to become a slow-burning seethe as echoing guitars ricochet around dubbed-out drums and stalking bass, finally ending on some kind of Neurosis/Sons Of Otis space-sludge comedown.

Elsewhere we have the moody transitional piece ‘In This Arid Wilderness’, the tautly driving death-metal influenced ‘Self Hypnosis 1: The Manual’ and its partner piece the doomed, pounding ‘Self Hypnosis II: The 18th Key’, and epic penultimate track ‘Machine Of Annihilation’, a sprawling twenty-one minute piece that shifts through hovering harmonics, thick twinkling atmosphere and huge, crushing chords, to decidedly Celtic Frosty choppy riffing and full-on deep space ambience before ending with a hallucinatory vortex of phased windstorms and crashing thunder that really seals the towering majesty that Clayton has conjured up here.

The echoing overhang of the storms that end ‘Machine Of Annihilation’ bleed through into the very opening of final track, ‘It Is Done!’, an all-synth outro piece with a Terminator-esque feel to its deep bass and chrome-plated swelling chords.

…and so, it is indeed done, and the fat lady hath sang for ‘Psychodramas: Breaking The Knots Of Twisted Synapse’, after a turbulent trip through interior space…but….WAIT! Are there not nine, count ’em, NINE, bonus tracks to discuss?

Well, yes, there are, but d’you know something? I’m not going to tell you about ’em. Instead, I think that maybe you should get ye forth to the Camel Of Doom Bandcamp, lay down your meagre shekels for your very own copy of this expansive epic and experience the rest of it for yourself.

I’ve told you about half of the trip, the rest is up to you.