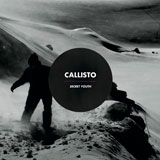 If you could ever tag a band as explorers, then the Finnish metal collective of Callisto are traversing arctic tundras and expansive mountains people dare to dream of as we speak. Simply not content with sticking to a conventional weapon range, their output has spanned from within the depths of sludge and doom, a bruising metalcore offspring in their earlier output, a progressive noise rock force and luscious atmosphere shapers. Callisto could be all at once or cherry-pick from uncountable different sources, thus is their talent in making music together. On their fourth grand expedition in Secret Youth, there’s a further dimension to their exploration, stretching to a much larger, colder sound and even into sounds beyond the realm of what’s possible in a band setup.

The album begins with Pale Pretender, an analogue synth war horn signalling in a disjointed drum time signature. Atop of the clattering of drum skins, there is guitar playing reminiscent of riffs in the framework of the instrumentation here. But the sheer layers of instruments in this quickly progress into a dense background of noise. It’s strikingly massive in terms of sound and scale and becomes a staple in this album. But it’s the later grinding of bass with the cymbal taps, building up to a deeply unsettling danger that truly steals the show here. It sounds like darkness descending, shadows suddenly amassing into a creature of insurmountable scale that warps and twists into a demon of your own design. The tension does relieve somewhat at the end but that mood is indescribably sinister.

The complex snare bashing of lead track Backbone follows after, initially mellower from the dual textures of colder guitar echoes, harmonised with another effect-free guitar to insinuate frost setting in on this soundscape. The first taster of few and far between contained screams comes into ramp up tension shortly afterwards, leading into a whisper of synth underneath, entwining a sense of melancholy to an already powerful, emotive atmosphere.  Then a powerhouse drum performance intensifies this tenfold, utter chaos being the focus of this last minute of the song. The vocals here are especially strong, switching between the empowered serenade of one and the restrained screams of the other, adding more emotion into an already stellar musical construct.

The bass heavy foundation of Acts is next, accompanied by gorgeous melodic guitar strokes, flowing over the top of a thunderous drum pounding. A sense of urgency keeps this track in the realm of the ominous throughout, but where both Pale Pretender and Backbone took flight, this sticks firmly in the same gear. It doesn’t become detrimental, as another stellar vocal performance fires forward and there still lurks further icy winds, but it just doesn’t feel like it progresses or evolves enough for its length.

The more relaxed introduction of Lost Prayer follows after a small dose of sub-zero chills in The Dead Layer. Whilst not as intense as what has come before it, it is no less impactful in its execution. That dense wall of sound retains its unavoidable presence and teases a build into danger throughout, keeping you on edge constantly. There’s also a touch more vulnerability seeping through the vocals this time, almost as if the music could envelop and consume at any given moment.

Breasts Of Mothers however up-sells this emotion with a harder throb of aching, melancholic synth before reverb and delay soaked chords join the fray. The introduction here perhaps gives the best metaphor to a sense of loneliness and isolation yet found on this album, before the explosion of drums heightens and intensifies this feeling. The half-way introduction of vocals and an understated yet awe-inspiring tremolo all but seal this as a highlight of the album, maintaining this mood effortlessly whilst progressively capturing the essence of what a darker period in a human lifetime would sound like.

That deeper emotive side flows into Ghostwritten, taking what could be referred to as a more traditional approach to post-metal. What could be passed off as a an almost spring-like breeze from the chords played, on their own with no backdrop, is crushed by ever mighty drum rolls, and snow settles once again. The guitars play off one another, one wails while the other cries, sustaining a sense of sorrow, then isolating just one guitar before crushing chords of doom drop through the proverbial glass ceiling. The screams are reintroduced at the song’s close and for the vast amount of noise, compliments the heaviness nicely, by far a better example of the band’s progressive song writing prowess.

Past the guitar and scream focused foreboding of second interlude Old Souls, lies the finale in Dam’s Lair Road. The warm buzzing of synth sets the journey into stead, with the steady pounding of a bass drum giving it a grandiose stride, fitting of a conclusion. Accompanying softer strums stand either of this pace, and vocals narrate it as it transpires, building into another densely packed passage of sound. The sense of threat takes a different form however, not dissimilar from being followed or lurking around a corner in wait, that moment of uncertainty in the song has the potential for many different directions. That uncertainty introduces possibly the only genuine instance of strings on the album, adding an extra tint of sombre to an already on-edge atmosphere. But the suspense just keeps growing from here, swelling to the point where it could decimate anything within its path, but instead implodes, leaving synth noise to fizzle out the end. Lovely progression throughout, but the climax does feel somewhat underwhelming.

In any case, Callisto are lightyears away from their peers, in an entire universe of their own in fact. In creating and sustaining such chill-inducing, vivid yet jet-black atmosphere, contained within each chapter of Secret Youth, they have few to zero rivals. The choice to remain with almost exclusively clean vocals solidifies the impact of every nuance they make instrumentally and is a standalone highlight in the tremendous compositions they bring forth.

There are weaknesses stemming from the two interludes not slotting perfectly in place and one or two moments where you expect the music to take off, for it to simply remain at ground level, but it doesn’t deter from such wondrous compositions. Murmurs around the internet are already heralding this as a potential album of the year, and whilst it’s too early to call, it’s safe to say they make an iron-clad case. Post-metal is such a tenuous label to slap upon bands that stray far beyond metal’s worn down, tried and tested conventions, but Secret Youth transmits from uncharted territory, a path that dances with fear and foreboding in a manner that defies human imagination and redefines how we can musically envisage a darker, uncomfortably personal journey in our lives. A remarkable album.