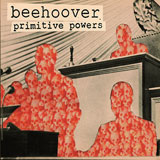 German duo Beehoover manage to tread the line between ‘immediately inaccessible’ and ‘wilfully alienating’ so well that they render the division meaningless. Their punchy slices of Krautrock and psychedelia-laced stoner-metal contain numerous identifiable chunks of influence, but a certain something so wholly individual that it’s impossible to imagine anyone but Ingmar Petersen (bass/vocals) and Claus-Peter Hamisch (drums/vocals) making noise like this.

Primitive Powers throbs with a twisted, playful energy that is married with a clear sense of self and backed up by incredibly canny instrumentation. Pissant Wings gets us rolling with some satisfyingly grunty bass and a slightly awkward rolling groove. Hamisch’s drum work is busy, a constantly shifting landscape that drives forward and holds back in just the right places. His performance on this album is beyond solid, and it’s worth picking up the record for that alone.

Bombs & Bagpipes showcases the duo’s tongue-in-cheek approach to both song naming and song writing well. Tonally, and in their repeated toying with things like form, tempo and structure, they echo acts like the Melvins with their wilful and playful challenging of genre standards. Millwheels Of Being takes the stoner-metal overtones that sit highest on Beehoover’s ‘influenced by’ list and snakes them through retro tones and slightly prog laced licks, stop/starts, before driving it home with a locked-in, mean riff.

Tickling The Dragon’s Tail is a sound collage, all repeated, spacey echoes, whistles, whines and jabs of feedback. Embers is full of instrumental flair, from the subtle piano touches to the jazzy drumming and wandering bassline, right through to the slightly anxious middle eight to the edgy climax. Anti Zooo comes off as a little repetitive, hinging on atonality and a bluesy descending breakdown until it throws in several false endings.

The record concludes with, arguably, the two strongest tracks. Light My Pyre buzzes moodily, the drums restlessly active, smooth bass tones sliding over each other. The melancholic, slightly sleepy air is shattered by big, dissonant bass quakes and angular riffing, spurred on by galloping drums. My Artillery, if listened to in isolation, it’s a decent summation of the record as a whole – spacious bass echoes and unusually restrained drums melt into a lumbering main riff. Post rock themes give way to a galloping run, with something of a whiff of Mastodon about it. Its sharp riffs and jagged edges, ending with a scream of triumph.

Solidly crafted, there’s nothing primitive about this album, or about Beehoover. It’s rare to find an album so immediately engaging, and yet still challenging after repeated listens. The result of much refining and joyous experimentation over their career, this sounds like Beehoover, and nobody else.