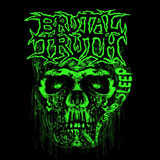 Two tracks, three minutes and four seconds of total lunatic grind, what the hell else did you expect from Brutal Truth?!?!

Making available two tracks that were previously featured on one of those annoying (for us in the UK anyway) Decibel Magazine giveaway flexidiscs, this here short and not particularly sweet digital EP comes hot on the heels of BT’s latest magnificent grind octopus End Times and features a re-recording of the legendarily intense ‘Walking Corpse’, from their debut album Extreme Conditions Demand Extreme Responses, paired with a new track, ‘You Should Know Better’.

Is there really any point in telling you what to expect here? If you don’t know that Brutal Truth are a whirlwind of razor sharp riffs, grinding bass, lunatic drumming and the angriest bear in town on vocals then, well, where the hell have you BEEN for the last twenty-odd years?

Suffice to say that ‘Walking Corpse’ just about manages to surpass the original for musical intensity, but doesn’t quite match it in vocal intensity – hell, the original shrieks of “JUST A WALKING CORPSE!” are pretty much unsurpassably inhuman – and ‘You Should Know Better’ wouldn’t sound at all out of place in amidst the tracklist of End Time.

So, there you go. Brutal Truth. As mental and abrasive as ever.