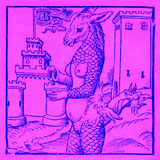 I don’t trust that donkey one bit. She’s got a donkey’s head (‘natch), human boobies, scale-y lizard skin, an exhausted dragon for a tail, a bearded Neptune-type dude for a backside, an elephant’s trunk for one arm, a swollen pot belly and a rather prominent vagina. Nah man, she’s shifty as fuck. And on a pink backdrop too? The cheeky little, errr, whatever she is…

Ordinarily, upon encountering such a creature in any other situation I’d be getting the hell away from that castle claimed in the name of “B” ASAP, but there’s some doom to be doomed along to first; Brume doom to be precise. Brume are a brand new entity, punched from the womb by former Gurt axe-master Jamie McCathie after a successful relocation from his native London to San Francisco, no less. Teaming up with the innocent-looking but banshee-lunged Susie McMullan (bass, vocals) and solid sticksman Jordan Perkins-Lewis, the trio plug in, tone low and set off on a voyage to the damned and the beyond on this, their debut five-track EP.

I don’t think it would be unfair to say that in the practise space (which I can only hope is referred to as the “Brume Cupboard”, hoho!) Windhand, Jex Thoth, Blood Ceremony, Electric Wizard and Sleep must be on a near constant rotation. The final three tracks on Donkey especially are very close in form, ethos and spirit to Windhand’s more modernised and organic take on the crushing Sabbathian template of the Lekkie Wizters themselves. Always a guitarist I enjoyed watching live back in his London days, Jamie abandons much of the bluesier roots that he moulded the early Gurt sound around in favour of a droning Dave Chandler-esque barrage of heaviness on the likes of Help Meand Mother Earth. Melded to Susie’s broodin n’ a-groovin’ basslines, the frontline-leading duo are a powerful force on record and each song comes across with all the velocity and intensity of an aircraft-carrier on war-mongering duty. In brief, Donkey’s five songs ain’t revolutionary stuff, but they sure as shit sound colossal when you crank them hard.

Shadows is a curious one to open up with in that it’s probably the least hooky cut of the lot. Seven righteous minutes of Jordan’s thunder-clapping, mid-paced drumming is overlapped with Susie’s hankering wails behind the mic whilst her bass strings and Jamie’s sizable riffs will cause your pint (or 50cl, your pond-side depending) to begin to rumble in your grubby mits. Eerily bookending the song with some subtle acoustics and ending with the sort of riff-out that Bongzilla or Serpent Venom wouldn’t turn their ears away from, it’s an alluring mermaid-on-the-rocks of a lead-off.

Win keeps the spirit low, but as Jamie and Susie begin to step through the gears, it’s clear there’s more than Sabbathy tunes to retrace in Brume’s closet (I’m sorry guys, it’s the bristled pun that keeps on giving). Susie’s vocals are more subtle than Windhand’s Parker Chandler, yet more sincere and delicately rich than, say Johanna Sardonis’ shrill authority and her ghostly overtures sit comfortably in the embrace of the fuzzy amplifier vibrations.

Even If Love and Mother Earth both see Brume step more into their own confident stride. Yes, there are still the riffs overflowing with bass and Jordan’s off-beat, heat-defeating drumming patterns but with Susie’s sultry hymns as the clotted cream topping this scone of pure finesse, it’s as if someone married Alunah, Tombstones and SubRosa in an orgy-fest of doom and sent them off on honeymoon in a rocket ship to the holy mountain with tins cans rattling in their denim-clad wake. In many senses, Mother Earth is a strange choice to end with as arguably the most upbeat number of the EP; it hints that Brume are only really just settling into their ideas as Jamie’s skilled solos cackle off into the ether.

Despite that cover art still giving me nightmares even in my daydreams, Brume’s debut EP Donkey is a solid outing with some exemplary drumming, bolshie, head-banging riffage and a layers of luscious, soulful vocals. I’d say at this stage that I’m keener to establish exactly where this band can take their grand and powerful, yet delicately precise sound but for now this is definitely one to pick up rather than sweep under the rug. ‘Cos, y’know, you sweep up with a Brume dontcha?!