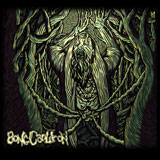 Over the recent years, it seems we in the UK can’t get enough of sucking on the fattened tits of mother doom, (may her lactation be everlasting) while she promiscuously slides out more filth into the underground shit holes of our graceful Queens land. One of her fine blasphemic creations, goes by the foreseeable name of BongCauldron. I first heard of BongCauldron not much over a year ago while attending ‘Kin Hell Fest, their name was new to me and their show came across in an impressively entertaining blend of groove and dirt; a welcome relief to the relentless amounts of death metal. Since then they’ve become a fairly frequent sight on flyers and posters within the scene, appearing a second time for me alongside the mighty Windhand at the Star and Garter in Manchester. They have become a force to be reckoned with over a short amount of time with good reason.

Their debut EP emerges from acidic reverb into the effluence of a lurching blues beast with ‘Tree Wizard’. Though obviously beating a worn path with the concept and lyrical content, this has a certain stereotypically indulgent humour to it. The sound of the band and the EP is defined in a compacted package of booze grooving haze in this track. A face first plunge into a sewer of hard liquor, sight hindered through clouds of bong smoke, occasionally bumping into the hideous slime obscured beasts surviving through luring and devouring thrash fans.

The production on the EP is well suited to the style, low fi enough to contribute dirt when all cylinders are go and the engines roaring, but dynamic enough to ensure atmosphere is maintained, and that there’s clarity in the deep snarling bass tone and red hot valve amps.

Through the EP, different elements of a broad genre are utilized with no single influence being dominant, although they are easily distinguished. The uglier side abandons the crippled blues groove and Sleep style spaceman bong nostalgia to delve into pure sludge filth with a more guttural take on the vocals, which in their normal state sound like someone has gone wrong enough to splice the genes of Lemmy Kilmister and Matt Pike. This satisfying decadence is present at the start of the crust covered deprivation in ‘Vehemence’, which comes through the other side ending in a booze and stimulant groove ride reminiscent of Goblin. The guitar takes a general role of crushing you in sharp fuzz, often on the back foot of the bass. It holds the rhythms’ and when it wants to, buries the track in a thick crust of biting tone, before evolving into looser uplifting bastard blues, or tighter “Dopesmoker”, esque drones.

For every Gin soaked fist pumping groove there’s THC induced cosmic nodding at the other end of which ‘Gauze Rite’ is a superb example. The guitar gains stoned momentum which is only exemplified through droning repetition, before collapsing into one last Church Of Misery style heavy groove complete with wah solo. My favourite moment on this track, and the EP, is the truly brilliant bass line on the introduction, which rides over a simple strong rhythm occasionally harmonising with subtlety and a vibe that’s un-usual indeed within the confines of this genre. The bass throughout the whole EP is the more dexterous element for that matter, snaking malevolently around the weight of the guitar effectively, or adding well executed blues style scales around the backbone of the guitar.

BongCauldron’s debut is a weighty powerhouse of dirt, riff and groove. This is a blend they manage skilfully and effectively. There’s nothing ground breaking which is almost beside the point, because this is an endeavour of hedonistic gratification, if it’s a narcotic party cocktail of heavy riff and slime you’re after, you will enjoy it. 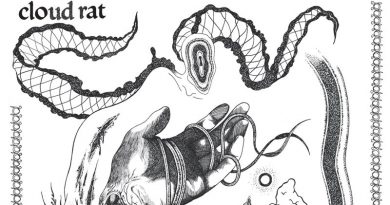