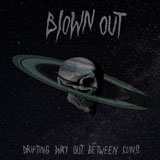 Ah… Mike Vest. How many bands can an axe slinger take on in any given amount of time? How many ‘waster lead, face slashing, freaked out, black-hole-psychedelic-deathtoll-car-crash-blues-jams’ can a man stand? Quite a few, it seems. In Blown Out,  he’s joined by John-Michael Hedley (low axe) and Matt Baty (hammers) from the aptly named Pigs Pigs Pigs Pigs Pigs Pigs Pigs, whom themselves released an excellent slab of noise called Psychopomp this September.

Here’s an open secret to the guitar work of mister Vest: pick a random SG, get a Carlsbro Stingray combo amp, then add a core pedal line-up of modified Big Muff, delay, wah, and phaser. Play all of these like you’re a psychedelic caveman version of Hendrix who listened to too many early Skullflower records. Vary amounts of pedals and different studio tricks to diversify records. Give records different names, use different rhythm sections on each. Never forget to add a boatload of useful adjectives like ‘lysergic swirling chocolate’ to describe the noise. Pronto. Thus, Blown Out, Bong, Haikai No Ku, 11Paranoias and other bands Vestorino played in all share a certain guitar sensibility even though production and rhythm dynamics vary wildly.

Primitive psychedelic HendrixFlower. That’s what this album, correctly named Drifting Way Out Between The Suns, sounds like. The two Pigs on rhythm duty aptly support Mike Vest’s subtly changing guitar vortexes, with Matt on drums delivering a single minded, ride cymbal driven Mitch Mitchell groove and Johnny’s thick-as-my-mommas-syrup bass superbly coated over the fluid freeform rhythms. The two jams contained herein each trudge on for a full twenty minutes, giving the band and the listener ample to time to lose themselves in the freeform waves of singular groove and caveman psychedelics. Parts subtly change; sometimes Vest grabs hold of a passing comet while the other two chaps keep it locked tight, sometimes Hedley grabs hold of Vest’s solo parts and amplifies them with black hole bottom-end while Baty’s drums march on to the sun.

It’s all starting to sound a bit familiar, isn’t it? Did I repeat myself there, after making fun of adjectives in the intro? Yeah. Stoner, doom, psych, drone – these by now popular genres (watch the festival line-ups and metal magazines, ya nutter!) are a bit saturated with this kinda psych-jam thing now, not in a small part due to mister Vest himself. They’re also saturated with shitty reviews like this, hence my own self-parody. For those who don’t know Mike’s previous output yet love freeform psych jams, this album is a fine addition to your collection. For those who do, it’s only the twentieth iteration of the same guitar sound with ever-marching jamrock rhythm section, and not the most extraordinary either. Haikai No Ku, Bong and 11Paranoias will serve you better.

Or maybe all you need is a decidedly new slab of noise to stick your heads into in order to forget about tomorrow.

But I? I need more. Vision. Execution. Intuition. I don’t give a fuck, just feed me, ya slackers! I’ve worshipped your dedication to liberating noise for years!! To quote the Big Black Ass Steve Albini, I need it like a fix.. I need it to relieve my pathetic, dilapidated urban existence. And yet, I’ve built up tolerance… But alas… I digress. Apologies. I am keenly aware this is still a review.