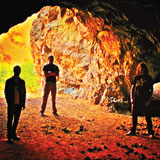 Blaak Heat Shujaa is one of those names that you hear a lot but not one I’ve actively sought out to investigate, and quite possibly may not have if it weren’t for this review. Notwithstanding my ignorance as to their output and history they do seem to be making a few waves in the stoner and psych scenes in the last few years which has led to a deal with TeePee records and this new EP…which actually runs to the length of a full album but at 6 tracks let’s not split hairs.

Now, this is where the role of a reviewer becomes precariously split. On the one hand there is an emotional response; do you like the band, does it move you, does the music grab you by the nuts? On the other hand there is a critical appraisal; regardless of how you feel about the music, can you recognise the band’s abilities and skills as musicians and composers? This album, for me, falls into the second category. It’s not that I actively dislike their lengthy forays into psychedelic stoner, it’s more that it registers very little within me.

That’s not to say that the band are in any way bad. In fact these ex-pat Parisians, now residing in Los Angeles, are extremely skilled in their field as they blend driving, twisting bass lines, shifting rhythms and Eastern influenced guitar lines to great effect and are able to build songs with constantly moving dynamics whether it’s on the epically lengthy opener “The Revenge Of The Feathered Pheasant” or the brief instrumental “Incident At Stinson Beach”. Blaak Heat Shujaa are able to effortlessly slip from trippy passages of Pink Floydian scope to monolithic heaviness at the drop of a hat and back again and maintain a greater sense of focus and structure than a lot of similar bands who would simply go of on tangents and jam aimlessly over the course of an 11 minute song. BHS certainly do create a very evocative mood as they flit between eastern tones to an almost Spaghetti Western meets surf kind of vibe…no easy feat and evidence of their compositional skill and tight knit band vibe.

That’s the critical appraisal out of the way, do I like it on a personal level? Not particularly. Is this a question of personal taste? Almost certainly. When you come from a mindset that is firmly entrenched in tight, 4 minute song writing and blues based rock and roll, to step out of that into different worlds can sometimes seem jarring but there is much here for the connoisseur of psychedlia to embrace and enjoy.