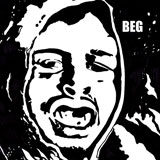 Featuring Grief from London-based filth-mongerers Art Of Burning Water on guitar and Elliot Smith from like-minded grinders The Afternoon Gentlemen on drums, Beg excel in the kind of power-violence oriented grind that hits as quickly and accurately as drive-bys. With fifteen short, brutal slabs squeezed into less than quarter of an hour, it’s not just an album that warrants repeated listens, but one that practically demands it, the full run-time breezing past in the time it takes you to stop marvelling at the, frankly genius, song titles (Rush Are My Favourite Power Violence Band, Dustbin Hoffman and Chicken And Chips Black Metal are minor masterworks in their own right).

In a shining example of doing less with more, Beg never really seem to re-tread much ground here, flitting from old-school death grind a la Repulsion to the more up-to-date groove-heavy crush of Nasum and Rotten Sound while still keeping a few touches of their day jobs intact. There’s no predefined sense of style or tempo, so the album sometimes has the feel of a collage of monstrosity, a cut-and-paste grotesquery where downbeat sludge, crust ferocity and blastbeat-oriented insanity can share borders somewhat comfortably. Smith’s drums are sharp and relentlessly on-point throughout, occasionally staggeringly so, and Grief’s handiwork is all over this, the guitars taking on a murky, septic tone that toes the line between precision noise and the sickening recitation of society’s ills. As for vocalist Ed? It’s doubtful that they could have found a better voice for this project, his grunts and screeches utterly feral yet split pretty evenly between hardcore and death hues.

There are certainly no shortages of quality grind bands these days, but Beg certainly manage to stand out. Those song titles; the samples, quoting everything from The Mighty Boosh to cult 80s anti-racism flick Babylon; the fact that they manage to include everything a good grind album should have while still chucking in searing power electronics, chunky breakdowns and sludge so thick that you could lose your shoes in it. Rather than completely abandon melody, it’s tentatively included in its most rudimentary guises, never openly apparent yet pervasive enough that at least a few of these beasts will be crawling around in your skull for a while. Tongue-in-cheek misanthropia or just plain filth? Either way, Beg makes it work.