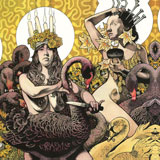 Yellow & Green, the double-album from Savannah, Georgia sludge band Baroness, is already one of the most talked-about records of the year. It’s barely been out a week but it’s already dividing opinion left and right with some people praising it as a progression from the band’s ballsier but more ragged roots and others calling it a sell-out move towards a more mainstream sound. Other people just hate the idea of a double album because of the sheer audacity and pomposity that has long been associated with the medium. Regardless of where you stand at this point, whatever you thought of Baroness pre-Yellow & Green may well be tested on first listen to Yellow & Green but that’s OK – it’s an album that needs to be listened to repeatedly to be properly appreciated.

Baroness deserve respect for making a double-album in the first instance. In an age when albums can be so easily dissected and torn apart by mp3 player shuffle-functions and file sharing, Baroness have not only created an album that feels like a cohesive, unbreakable whole but they’ve also done one better by expanding their material across two inter-connected records. After repeated listens it becomes clear that the decision to expand the album was out of necessity rather than a conscious decision to distinguish the two sides. In all honesty, there’s not a lot of difference between disc one and disc two musically which leads one to reason that the band probably had too much material to fit onto one record and, given the less-than 80 minute duration of Yellow & Green, not enough to warrant two full albums-proper.

Now on to the more serious charge that has been thrown at Baroness of late – that this is a weaker, more mainstream album than 2007’s Red or 2009’s Blue. Yes, this is not necessarily a Baroness album for old-school Baroness fans. There aren’t many songs on the album that you could call “heavy.” In a recent interview with Metal Hammer, Baroness frontman John Baizley agreed that “it would be an incredible stretch” to call the music on Yellow & Green heavy metal. And it’s true – pick any track on either side of the album at random and chances are you won’t hear a distorted guitar or one of Baizley’s mighty roars. You’re far more likely to hear folk and prog influences and Beach Boys-esque vocals. “Twinkler”, for example, is a delicate acoustic-led number with flutes and lush, layered vocal harmonies which recalls Led Zeppelin’s “Stairway to Heaven” or King Crimson’s “Moonchild.”

But the album is less of a departure than it immediately appears to be. Listen closely and you can hear the same kinds of progressions, breakdowns and dynamic shifts that made Baroness such a hypnotic and powerful band on previous albums. The difference is that the band are now more measured in their approach to making music and rely less on broad metallic stokes and more on fine melodic details. Lyrical themes and musical motifs weave in and out of these songs giving the impression that the band can now deliver a complex musical vision over the course of a body of work rather than allow each individual song to be its own microcosm. And like the Baizley artwork that adorns the cover, the imagery in the lyrics are more evocative than ever before. Take for example the final track on side one – “Eula” in which the protagonist laments: “I can’t forget the taste of my own tongue.” This follows the line: “Oh this apple makes me sick/ Cries the pig upon his stick/ It’s my own blood.” Regardless of what it means, it’s an image that stays with you long after the song fades out, and many of the tracks feature similar lyrical details.

There are some rockier numbers for fans of Baroness’ earlier work but they are more nuanced and sleek than the likes of “Isak” or “Wanderlust”; “Take My Bones Away” is a slab of driving uptempo punk rock, reminiscent of QOTSA or the heavier side of Foo Fighters. The same goes for “The Line Between” which even recalls Muse. But it’s not the heavy songs that really satisfy on Yellow & Green; this is a less instantly-gratifying Baroness album than the ones that have gone before it but it shimmers with a majestic, masterful elegance that the band have long been aiming for.

It may not sound like anything Baroness have released so far but Baroness fans will be doing themselves a disservice if they disregard Yellow & Green for that reason. It’s an album with an oceanic wash of emotional variety and depth of meaning that deserves to be explored and enjoyed on repeated listens. It’s a grown-up record from a band that has learned that it can be just as devastating to express anger and frustration in a calm, elegant manner as it is to express it with brutal noise. Baizley has always hinted that Baroness’ albums could be roughly summed up by their colours – Red was anger, Blue was depression but what Yellow & Green symbolise is up to you to discover.