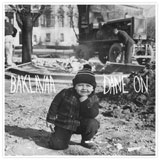 I’m a sucker for a good bit of noise rock. There’s something so appealing about the juxtaposition of the ugly and the beautiful in music that makes bands such as Sonic Youth, Shellac and The Jesus Lizard as popular as they are. One of the key success factors in noise rock, however, is being able to strike that fine balance between the noise and the rock. To really work, it needs an equal blend of each. The noise aspects and a strong approach to song writing, rhythm and melody need to coexist on a level footing to make it truly appealing. Baltimore’s Baklavaa are heading in the right direction on this, their first full length album, but right now they’re not quite getting the balance right.

Opening track Candy Cane is a strong opener and seems to bode well for the album possessing just the right blend of cranky guitars, off kilter rhythms and spastic vocals but with a strong sense of structure and melody to keep the listener engaged. Second track Ointment, however, shows the potential start to unravel at a fairly early stage. There is some semblance of melody hidden under the waves of noise but structure has largely been abandoned in favour of general dicking about. Plunger Lip does show an improvement. A nice, Shellac style bass line underpins the track which goes crash, bang and wallop in all the right places.

Next song, though I hesitate to call it that, IV is utterly pointless…or maybe I’m missing the point…but it is literally just a couple of minutes of noise…no music…just noise. I get that bands like to create an atmosphere but this kind of shit is pretty much a waste of time, space and effort. Tampered With does bring things back on track somewhat. A cool, eye rolling, soporific verse soon gives way to a barrage of angry guitar and psychotic vocals. The effect does soon start to wear a little thin and you begin to find yourself wishing they would spend a bit more time playing the guitar rather than apparently just hitting it!

Gold Candier I starts with static noise and, initially, it seems like a case of “here we go again, more dicking around” but when the song does kick in it’s actually a pretty sweet, melodic amalgam of Sonic Youth and The Jesus Lizard as the guitars intertwine around a gritty bass line. It’s at times like these that Baklavaa show that they have the potential to compete. This leads directly into Gold Candier II, which, although noisier, does possess a certain stomp and groove that gets the head nodding in appreciation and looks like it could be heading somewhere pretty interesting…before pissing it all away and disintegrating into feedback and pointless noise for the last couple of minutes.

Bad Filfth (sic) gets things back on track once again if you can imagine Shellac jamming with Fugazi…and remarkably it retains a recognisable structure throughout. Mey is more of the same and it starts to look by this point that Baklavaa are hitting a stride. In fact song wise this is one of the strongest tracks so far with an intense, driving rhythm and some cool guitar interplay that shows this is a band who, when they set their minds to it can pull it together and deliver a strong performance.

Going back to my earlier point about creating a balance between the noise and the rock, Baklavaa start to achieve this to far better effect on R Plastic as blissed out verses give way to hard, bug eyed choruses and back again. It has to be said that this is a headphone song as subtle melodies are buried deep in the mix under atonal guitars but succeed in adding a sense of depth that has maybe been missing so far.

Ginger V is over 8 minutes long…this fucks with my punk rock sensibility, particularly as the song is, shall we say, not a high point on the album…8 minutes of atonal, droning guitars and vocals and plodding drums…next!

Oh, the final track VI is next and ends the album with 2 more minutes of pointless noise!

Baklavaa are a band that, at the moment, have potential. When they get it right they show that they could have something to offer but at the moment they seem like a band trying a bit too hard to fit into the noise rock genre. They’ve listened and learned that the best bands have a solid rhythm section, strong bass lines, impassioned vocals, twisted guitars…etc but have yet to figure the sense of melody and form that does underpin all of the best bands within that style.

In a sense where they’re lacking is in really strong songs that pull you in time and again. For example, Baklavaa’s Candy Cane is OK but Sonic Youth’s Sugar Kane is a song in a completely different league…I haven’t heard Sugar Kane for a couple of weeks and I could sing the chorus now, I heard Candy Cane 40 minutes ago and couldn’t sing you a note of it. That’s what Baklavaa need to work on to hit the next level…less thinking about being noisy and more thinking about the songs…let the noise come naturally.