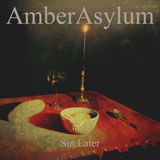 Many cultures worldwide have some form of the archetype known in the West as a Sin Eater; a person who is willing to take on the sins of the recently deceased, willing to let their own soul be tarnished so others may enter into Heaven, by the ritual act of eating a meal over the dead body. Like many figures who take negative aspects of others onto themselves – the medieval fool’s acceptance of mockery and derision perhaps being the most obvious – Sin Eaters were seen as a necessary evil whose association with death led them to be shunned from normal life, as much as their services were needed to bring finality to the dead and prevent them from rising again. Even Jesus, a figure who was widely shunned in his own lifetime, could well be seen as a kind of Sin Eater, eating his Last Supper over the body of World in order to take on the sins of Humanity.

So it is that for twenty years Amber Asylum have played the role of Sin Eater to the world of extreme metal, with Kris Force brought in to add her multi-instrumentalist touch to artists such as Neurosis, Swans and Jarboe; themselves outsiders to the everyday world but well-known luminaries in ours. Indeed, I first came across Force’s glacial vocals as they added an ethereal wisp of smoke and mystery to the bombast of Mayhem, Babylon Whores and Primordial on Misanthropy Records Presumed Guilty compilation.

All of which is a roundabout way of saying that Amber Asylum are a little bit special and a little bit out there.

Sin Eater opens with a slow-building tumble of violin and cello that’s as much a statement of intent as any crashing power-chord. It demands attention, like a magician rolling back their sleeves, before the mists part and Force’s voice rises like a wolf-mother howl above the trees. There is something about this 11-minute opener that calls the listener off on a journey to a distant, almost-familiar land where haunting cascades of string melodies replace guitar solos and drums toll out a slow, sad rhythm. It’s doom metal in every sense apart from the total lack of histrionic guitars and, perhaps most notably, awful male singing. This is borne out to its inevitable conclusion by the band dropping an utterly brutal cover of Candlemass’ Tot, drawing the already-gloomy track into a Joy Division-esque invocation of despair.

If none of this is grabbing you then you won’t be convinced by the rest of the album, which is an exercise in blending all of these elements into new but thematically-coherent elements of swirling strings and slow, post-rocky chord structures. The post-rock comparison may surprise listeners of earlier material, but if it wasn’t for Force’s inimitable voice, then there’s a lot here to remind the casual listener of A Silver Mount Zion’s mournful insistence.

Sin Eater ends with two 12-minute monoliths that will test even hardcore fans. Executioner owes a lot to the crawling malice of Jarboe as strings drone overhead and disembodied voices hover above a prowling bass-line in the perfect, lost-in-a-haunted-house, soundtrack. Sin Eater itself lurks in the non-Euclidean spaces between the haunted house’s walls, where sound reverberates eerily, and the echoes of long-lost music boxes loop endlessly. It’s a hard listen, more for the sense of claustrophobic loss it conjures than anything else, and when it finally fades into nano-music, you feel as if you’ve passed through a black mirror and out the other side.

Which is the moment you realise that Amber Asylum aren’t the Sin Eaters at all. You are. 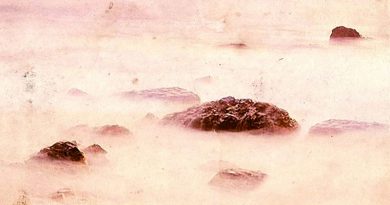