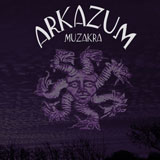 Arkazum, for those of you who may not know, is the solo project of original Cathedral bassist and Tranmere Rovers fanatic Mark ‘Griff’ Griffiths, a man whom you may also know from Year Zero – who released two albums via the legendary Hellhound Records –  and Jeff Walker’s post-Carcass band Blackstar. Yessir, he sure gets around.

The man has been laying low for a few years now, aside from the recent Cathedral reunion show, plotting his revenge and beavering away on this set of tunes. Essentially a defacto solo album, Muzakra shows exactly how capable Griffiths is of negotiating his way around a decent song and handling a variety of moods whilst still maintaining a cohesive identity. You’ll find none of the overblown ten minute epic ur-doom of ‘Forest Of Equilbrium’ here, only eleven tracks of solid, well-crafted dark-toned rock with a doomy edge, a gothic twist and a progressive spark.

Opening with the ominous sound of thunderclouds, ‘Our Father’ serves as an excellent introduction to what is to follow, being as it is a compact mid-tempo darkly-toned rocker with a doom-tinged chorus that showcases Griffiths’ impressive baritone and ability to whip out a tasteful, artful solo when needed.

Speaking of Griffiths’ voice, for the most part he adopts a subdued baritone that verges on sing-speaking, but does mix things up some – such as on the low-key melancholic fragility of the semi-balladic ‘You Can Be My Hearse’, for which Griffiths croons in a voice a shade above a whisper, colouring it with a watery effect, and on the previously-mentioned opener ‘Our Father’ and the frankly-a-bit-odd ‘Black-Lipped Grin’, in which he breaks out into a Carl McCoy-esque gothic baritone.

Elsewhere on Muzakra there is ‘Lungland’, which opens with a groove and melts into violin-soaked Paradise Lost, circa Gothic, territory before adding a tinkling cocktail piano, the somewhat subdued, vaguely jazzy intro to ‘Cold Wind Blows’ that gives way to harmonised guitars and that dark baritone again, and the up-tempo ‘Temple Of Love’-a-like ‘Black-Lipped Grin’ with its strange piano and harmony interlude that is somehow reminiscent of the melody to ‘Close To Me’ by The Cure.The slurred-sounding borderline industrial-ambient instrumental ‘Initiation’ marks the halfway point of the album and is followed by another up-tempo rocker, ‘Contemplation’ , which in turn is swiftly followed by another short instrumental, the pastoral, progressive ‘Deep Joy’.

Up next is the slightly odd Zodiac Mindwarp grinding groove of ‘Bombiel’, which boasts some supremely berserk lyrics – lyrics to all the songs are provided on the inlay and prove to be another of Griffiths’ strengths, as anyone who ever cared to peruse the lyrics to Cathedral’s ‘Serpent Eve’ will tell you – followed by the bouncing groove and ambient trance of ‘Udderbudder’ – somewhat like a Venusian take on Cathedral’s ‘Ride’, feel-wise – before finishing with ‘Zumlight’, a number that immediately calls to mind ‘Colossus’-era Scorn, which is sure as hell no bad thing.

Phew! So there you have it. A journey through the mind of Mark Griffiths, and what a strange and compelling journey it is. Not quite the doomfest that some may have expected, yet still dark enough to satisfy the curious Cathedral fans out there, I’m sure, Muzakra has the feel of a labour of love for its creator, and a summation of all of his musical aspirations and influences thus far. Having written all of the music and lyrics and more than likely played or programmed all of the instruments herein – credits mention no other assistance – if I was Mark Griffiths, I’d be feeling pretty damn pleased with myself right about now.